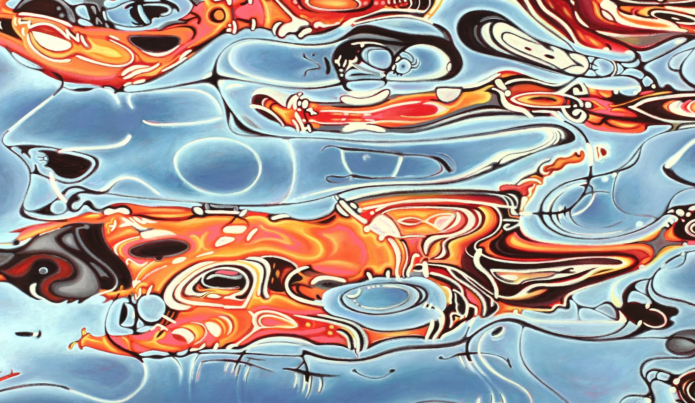 Danielle Eubank’s 20-year quest to visit and paint the waters of every ocean on Earth will be complete in early 2019, when she ventures to Antarctica. This, the Southern Ocean, will be Eubank’s fifth and final ocean to visit and will cap her decades-long quest to paint every ocean on the planet, hence the name of her project: One Artist Five Oceans.

“Painting all of the Earth’s oceans is about showing, through art, that the oceans sustain us – literally and, for me, artistically,” says Eubank. “There is a unifying preciousness amongst these bodies of  water – and the people and animals that rely on them.”

A Pollock-Krasner Foundation Grant awardee and a member of The Explorer’s Club, Eubank’s relationship with ocean water began as a young girl growing up near Bodega Bay in Northern California. In her travels as a young artist, she was captivated by bodies of water. She focused on painting water in its myriad conditions, refining her techniques of abstraction and realism until she was able to render their ephemeral qualities in her own style.

Eubank’s 20-year quest to paint all five of the planet’s oceans started in 2001 in Andalucia, Spain after a bicycle accident forced her to abandon her travels and spend time in a fishing village, painting the Atlantic coast. This work led to an invitation to serve as the expedition artist aboard the Borobudur Ship, a replica ancient Indonesian vessel that rounded the Cape of Good Hope sailing from Indonesia to Ghana, in 2003-4.

The experience cemented her commitment to paint the five oceans of the world and in 2008-2010, she sailed on a replica of a 2,500-year-old Phoenician ship that circumnavigated Africa, a trip originally made 500 years before the birth of Christ. Eubank most recently (2014) sailed aboard a barquentine tall ship on an expedition to the High Arctic that took her to the northernmost human settlement on Earth.

In each of these journeys, the vessel she sailed on in the open sea inspired her to view the bodies of water in exciting new ways, capturing each ocean as an entity, with her work portraying individual portraits of mood and emotion.

In February 2019, she is embarking on a rare voyage to the Southern Ocean, the fifth and final ocean for Eubank to visit and capture. This journey will complete her life-long quest and will inspire the creation of a landmark series of ocean paintings which will be exhibited beginning in 2019.

Eubank is exploring the consequences of the human footprint, including climate change, on seascapes all over the world. The body of work simultaneously communicates the preciousness of water and the impact of humans on the environment.

The surface of the planet is approximately 71% wáter.

There are five oceans on Earth, as follows:  Arctic, Atlantic, Indian, Pacific and Southern.

The ship Phoenicia at www.wikipedia.org/wiki/Phoenician_Ship_Expedition