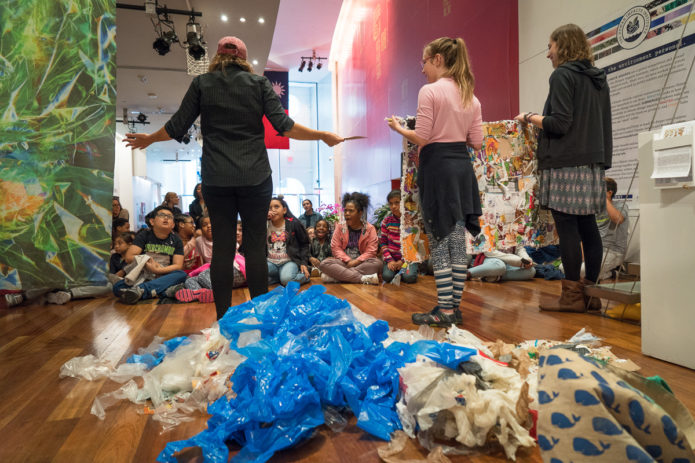 Empowerment: The Children’s Zero Waste Climate Quilt Project made its debut at the Cheshire Children’s Museum in Keene, New Hampshire in March of 2017. It was inspired by another art piece that I started working on in New York City in 2012. I had been engaging the public at art openings and ecologically minded events to think about our plastic waste footprint through my art piece The Plastic Bag Project – a giant ball made from single-use plastic bags that have been cut into strips and then braided and crocheted together to form a kind of plastic rope. Imagine a huge ball of yarn, but made entirely out of plastic bags. The ball weighs over 80 lbs and when unrolled stretches out to the length of four football fields.

I invited people to touch the ball, pull on it, try to lift it, unroll it, sit on it and sometimes even stand on it. It was a big hit and really helped people understand that one plastic bag might seem inconsequential, but more than six thousand bags can have a serious impact. I had many conversations about the problem of plastic pollution and its effects on the environment. Children, in particular, easily interacted with the ball and had much to say about the issues facing the planet. This inspired me so much that I began to think of another art project that would directly engage children to create their own art, and give them the opportunity to chime in on the issue.

At about the same time that the idea of a children’s art project began to take shape, I was educating myself on the science of climate change and its relationship to human waste and, in particular, to non-biodegradable and/or non-recyclable garbage. Through the course of my research, I came across the Zero Waste Movement, which aims to show that we can make a difference in the future health of the planet if we are mindful of the non-biodegradable or non-recyclable garbage that we put into landfills on a daily basis, and try to reduce it. Additionally, rather than contributing to unbridled consumerism and purchasing new items, we can strive to put to good use worn or used items that still have life in them.

I wanted to find a way to bring this information to children in a visceral and intuitive manner. Because of the The Plastic Bag Project, I knew that it was possible, but I wanted to go deeper by challenging the children to create their own art out of materials such as packaging and plastic that so often go directly into a trash can without any thought for how many dozens or even hundreds of years that waste will remain buried under the ground or drifting in an ocean. If The Plastic Bag Project was a public, interactive art piece created to raise awareness, now the goal was to have the public not just interact with an already-formed art piece but to raise the stakes and create mindful art as a community.

Empowerment: The Children’s Zero Waste Climate Quilt Project takes place in a workshop setting. Typically, the first half of the workshop is a presentation by a guest speaker or myself on the human contribution to climate change and its harmful effects on all life forms. Then the children are given the opportunity to respond to what they’ve just heard. Each child is given a cardboard square and makes a statement on that square in the form of a drawing or through words. Painted cardboard boxes with waste statistics imprinted on the outside are set up around the classroom filled with discarded things that are found or collected in the community. Children are encouraged to browse and look for waste to use in their quilt square. The squares come from pre-cut cereal or snack boxes and other packaging that I collect from the trash or through donation from the community.

In keeping with the ideology of Zero Waste, none of the tools and materials used to assemble a quilt are purchased. All the pens, pencils, crayons, glues, scissors, etc. are used art supplies donated by citizens. After the children have created their artistic statements on the squares, the squares are “quilted” or tied together with strips of plastic from single-use plastic bags or packaging such as bread bags that have been collected from the trash or donated by the community. The cardboard squares have holes in them around their edges that allow them to be tied together with the plastic strips. Since nothing has been purchased to make a quilt, there is no financial cost. The entire project is made from recycled or reused materials.

While the workshops typically last two hours, the time needed to assemble a quilt, including the preparation of gathering packaging and garbage from the local waste management facility or donation boxes, and then sorting it, cleaning it, drying it, cutting it into useful portions or strips, and boxing it can take weeks. I do most of the prep work, but other artists, educators and members of the community are instrumental in helping to organize, present, gather materials, promote, and support the project. We work together to ensure that children feel empowered, not just when they see their artwork displayed, but also when they realize that their opinions and outlooks on the future health of the planet are valued and needed. They become part of the solution by becoming involved, growing more mindful, expressing their opinions and helping to educate others.

Currently, five quilts have been made and are traveling to different venue in the Northeast to help raise awareness about climate change and waste.

(All photos by Carolyn Monastra.)

Danielle Baudrand is an emerging self-taught artist, working primarily in mixed media. She often uses discarded objects, and explores the feelings associated with discarded objects. Her most recent work The Plastic Bag Project uses the repeated process of braiding and crocheting bags together to make one long chain that reaches over four football fields long. In this process she turns the thoughtlessness of discarded objects into mindfulness. Her work has been featured at the New York Hall of Science, The Iran International Green Festival, the Green Festival along other galleries, conferences and public spaces.