Turning Sewage into Soaps: The Sewer Soaperie by The Apocalypse Project

When you experience something that ticks you off, I’d recommend doing a project on it.

I was stuck in ankle-deep waters on one fateful day in Manila. It had rained for only a few minutes, but already traffic was at a standstill. The sewers were blocked – yet again! – and when the arteries are clogged, you can see the signs of an urban heart attack. All streets and alleyways within sight were impassable. Everywhere I saw people standing on higher ground, staring at the increasing water line in dismay.

The only ones cheering were the drivers of pedicabs, informal transport consisting of a bike and a small hooded cab for a passenger. They knew they could charge triple the normal fare because people were desperate. (To be fair, you’d have to be really cruel not to tip them well; it is quite heroic to pedal through weather like this.)

The many reasons for this blockage include how used cooking oil is improperly discarded in the sewers. It coagulates together with other objects that won’t break down right away, such as wet wipes and sanitary items. These blobs of fat have been nicknamed “fatbergs” in some cities.

It is these little apocalypses that make me do art about climate change. The Philippines, in the path of many typhoons especially with global warming, will only get more unlivable if behaviors go unchecked. And so, wet, grumpy, and miserable in the cold, I vowed to turn that experience into another piece.

A few weeks later, I was in Medellin on a residency for The Apocalypse Project. This Colombian city is quite the success story, having overcome a troubled history to win the 2016 Lee Kuan Yew World City Prize and 2013 Most Innovative City by Urban Land Institute, thanks to a renaissance in urban planning. Thankfully, in spite of many rainy nights during my month-long stay, Medellin did not get flooded the way Manila does and the sewage system seems to be well-maintained. 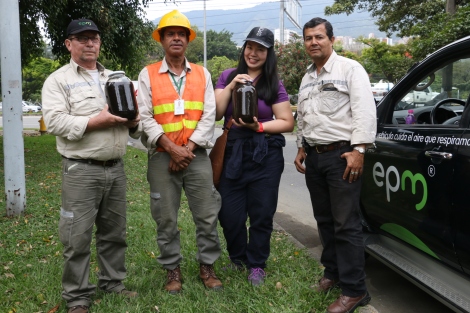 Manila and Medellin share similarities in both history and culture. And so I was interested to see how two cities can be so similar and different. My residency hosts, Platohedro and Casa Tres Patios, were able to get me more information about the city sewers, and one day I found myself staring down an open manhole. One engineer from EPM, the company that manages the city sewers, actually gave me access, and even gave me some samples for my research. I had never been so thrilled to receive a jar of sewage in my life.

I also got to visit the polluted Medellin River, which seems to be used as an alternative sewer by nearby residents. It was mostly water, but I was able to get some lipid samples. 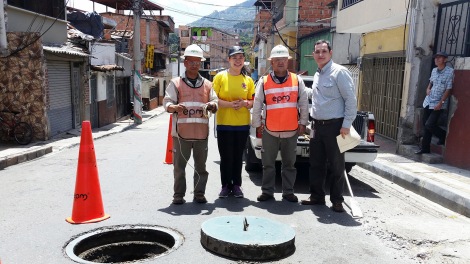 After my residency, I went back to Manila to apply what I had learned in Medellin. It was difficult to get permission to open up the sewers in Manila, and indeed I had many a security guard shoo me away as I tried to pry some manholes open. Undeterred, I found some sewage in many open pipes in this city that gives one a lot of apocalyptic inspirations.

In the studio, I combined the sewage I collected from Manila and Medellin. I filtered and boiled the sewage to kill as many bacteria and pathogens as possible, but I still wore safety clothing, not unlike the pieces shown in Climate Change Couture published on this blog. Soap is the salt of a fatty acid, so most soap recipes would call for any oil with an appropriate amount of lye or caustic soda. There was a lot of trial and error in searching for the right amount of lye, especially since I did not know the exact composition of these samples. Some experiments didn’t produce soap at all, while others saponified and, to my horror, started growing out of the molds. Some had layers of fat in them, looking a bit geological.

Finally, I had enough soap bars and small samples to exhibit. I exhibited these in 1335Mabini, a space for contemporary art in Manila, and at the Climate-Resilient International Development Exchange in Bangkok in USAID Asia. A hazard warning cautioned people against touching the samples. A few did anyway, gingerly, and someone told me they smelled like cookies. I would never touch these without gloves as I know their previous state too well. 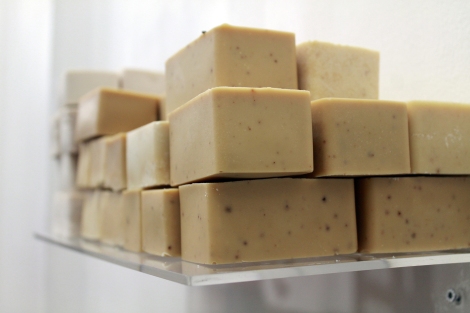 As an artist, it was interesting to see how people interacted with a project whose subject matter isn’t really discussed. People would gather, without me having to say anything, to examine the freaky objects displayed on a plinth and then engage in conversation about the cooking oil they use, traffic, and the myriad of other systemic problems of cities.

Improper waste disposal is one of the tiny behaviors whose consequences eventually interfere with everyone’s lives, and yet we usually blame other people for it. The value of art is that it gives us a platform to reflect on ourselves and our relationship with nature and our cities. To negotiate our place in the Anthropocene, we need to change our habits and make our systems work better.

Research for this project was made possible by a residency at Platohedro and Casa Tres Patios, with support from Arts Collaboratory and the Ministry of Culture of Colombia.

Thanks to Mr. Hemel Serna of EPM and his team for giving me administrative support in researching Medellin’s sewer systems.

Catherine Sarah Young is an artist, designer, researcher, and writer whose work explores emerging technologies and alternative futures through interactive storytelling and sensory experiences. Her experimental and interdisciplinary practice evokes conversation about our collective futures and individual choices. As an artist and designer, she has collaborated with scientists, companies, chefs, artists, think tanks, and museums around the world. As a writer, she creates worlds through science fiction and design futures, exploring themes related to the environment, feminism, and future technologies. She is the founder of The Apocalypse Project, a creative platform that explores climate change and environmental futures. 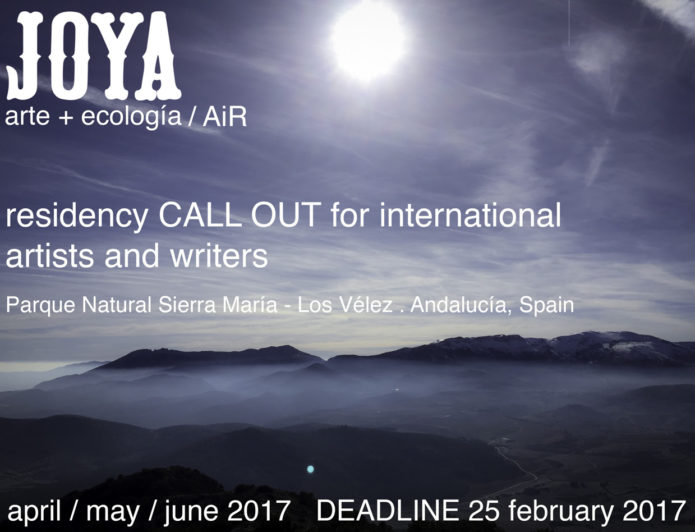 Joya: AiR (artist in residence), is located in a place of extreme natural beauty in the parque natural Sierra María – Los Vélez in the province of Almería, Andalucía, Spain. The Joya: residency is ‘off-grid’ making all of it’s own power from the sun and the wind, established as it is in the sunniest and driest place in Europe. Positioned in the mountains, surrounded by Mediterranean conifer forests, the environment that encircles us is of dramatically elevated sedimentary limestone and aromatic garrigue or matorral.

We are a not-for-profit arts organisation and international multidisciplinary residency. We are inviting artists and writers to apply for residency opportunities typically of the duration from one week to a month. We will consider longer periods if required.

As a cultural destination in rural Spain we have a broad but rigorous selection criteria. Typically, we are looking for young and mid-career artists and writers who express professional standards in their practice. We are looking for artists and writers who can bring a depth of knowledge and learning to the residency experience. Our acceptance policy is non-discriminatory but we do ask for a minimum requirement of an undergraduate degree from all applicants. In return we offer a residency that is often transformative. Residents have the opportunity for reclusive silence or a more shared involvement with other resident artists.

Resident artists and writers have access to studio space as well as 20 hectares of our own land and an additional 22,000 hectares of natural park. In addition, they have their own bedrooms each with an attached bathroom. All meals are included, breakfast and lunch can be taken to suit your timetable, evening meals are communal and always lively.

As part of the residency experience we ask artists if they would like to make a presentation of their work to other artists during the course of their stay. It is not obligatory but it is a good opportunity to showcase an artist or writers practice and receive constructive criticism.
The weekly fee for the residency is €300 plus tax at 10%. If selected, we ask for a minimum deposit to secure the opportunity of one week’s fee. This is payable via PayPal and is subject to a 2.9% additional fee for the cost of the transfer.

We are very happy to provide artists/writers letters of invitation for visa or funding applications.

APPLICATION DEADLINE February the 25th 2017 for the periods April, May June 2017

Where: At The Center

At this moment, two very different and unusual projects for addressing climate change are being explored in New York City. Plans are proceeding for a project by BIG – Bjarke Ingels Group to create a storm barrier called The Dryline (BIG U), which addresses New York City’s vulnerability to coastal flooding with a protective ribbon in Southern Manhattan. The 12-kilometer-long infrastructural barrier incorporates public space into the high-water barrier, cleverly disguised as skate parks, public pools, urban farms, bird sanctuaries, and marshland trails.

Simultaneously, an effort is underway to educate the public about the realities of climate change through the creation of a new Climate Museum. The museum will be a cultural and educational institution dedicated to climate issues and solutions, as well as a public space to learn about climate change, share solutions, and commit to change. By employing the sciences, art, and design, the Climate Museum will inspire dialogue and innovation that address the challenges of climate change and catalyze broad community engagement.

Kai-Uwe Bergmann, AIA is a partner at Bjarke Ingels Group (BIG) who brings his expertise to proposals around the globe, including work in North America, Europe, Asia and the Middle East. Bergmann heads up BIG’s business development which currently has the office working in 20 different countries as well as overseeing BIG’s Communications. Registered as an architect in the USA (eight states), and Canada (one province), Bergmann most recently contributed to the resiliency plan BIG U to protect 10 miles of Manhattan’s coastline. He compliments his professional work through previous teaching assignments at University of Pennsylvania, University of Florida, IE University in Madrid, and his alma mater, the University of Virginia. Bergmann also sits on the Board of the Van Alen Institute, participates on numerous international juries and lectures globally on the works of BIG.

Miranda Massie is the Founder and Director of the Climate Museum. Previously, she was General Counsel and Legal Director of New York Lawyers for the Public Interest (NYLPI), where she also served as Interim Executive Director. Before her time at NYLPI, she was a civil rights impact litigator, in which role she won professional honors including Fletcher Foundation and W.E.B. Dubois Institute Fellowships. Her board service has included the Executive and Finance Committees of the Center for Popular Democracy and the Governance Committee of a large Head Start organization serving the children of migrant farmworkers. She was a Wasserstein Public Interest Fellow at Harvard Law School and a Mentor-in-Residence at Yale Law School. Massie holds a J.D. from New York University, an M.A. from Yale University, and B.A. from Cornell University.

Organized by: AIANY Committee on the Environment and Urban Green Council