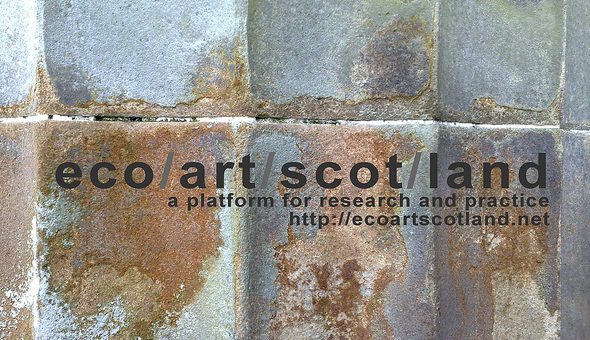 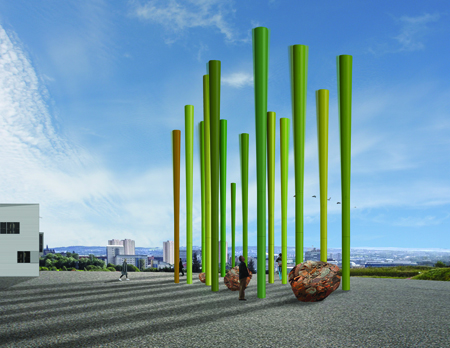 Can renewable energy become not merely infrastructure but a feature of place-making? What can architects, artists and designers bring to the transition to a post-fossil fuel economy? Can creative approaches contribute to the commercialisation of new renewable technologies? These are some of the questions that the Land Art Generator Initiative (LAGI) is asking and why ecoartscotland partnered with them.

The exhibition of the Land Art Generator Glasgow project along with examples from other LAGI competitions is currently installed on the Concourse of the Sir Ian Wood Building, Robert Gordon University, Aberdeen.

It has previously been exhibited in The Lighthouse, Glasgow; Exeter University Innovation Centre; and Tent, Edinburgh College of Art.

The Land Art Generator Initiative will be releasing the Brief for it’s next International Open Competition for a site in Melbourne in Australia in January 2018.

Chris Fremantle, who established ecoartscotland in 2010, is a Senior Research Fellow and Lecturer in Contemporary Art Practice at Gray’s School of Art. Outputs associated with this work have been clustered into a ‘project’ by the RGU Library Service on OpenAIR here. They include a chapter in the book of the LAGI Copehagen Open Competition in 2014, a conference paper at PetroCultures 2016 conference as well as the citation of the Chartered Institute of Water and Environmental Managers (CIWEM) Art and Environment Award made in 2016.

ecoartscotland is a resource focused on art and ecology for artists, cuorators, critics, commissioners as well as scientists and policy makers. It includes ecoartscotland papers, a mix of discussions of works by artists and critical theoretical texts, and serves as a curatorial platform. 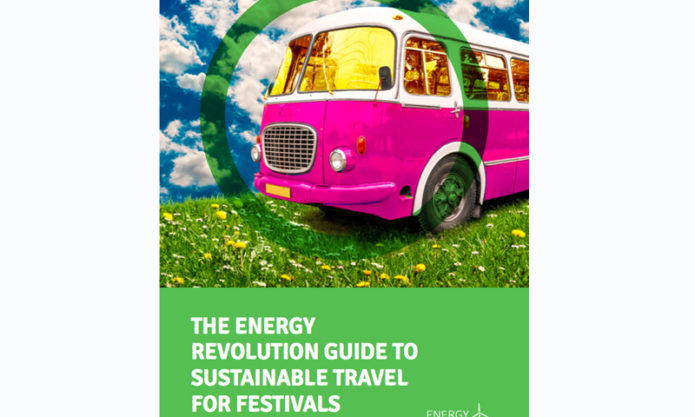 The Energy Revolution Guide to Sustainable Travel for Festival and Events was launched at the Festival Vision:2025 meeting at the Showman’s Show last month. Energy Revolutionis a UK charity that helps festivals turn travel miles into 100% clean energy through investment in renewable energy projects.

80% of the carbon footprint

With audience travel making up 80% of the average UK festival’s carbon footprint, tackling travel emissions is a key part of any festivals sustainability strategy. The new Sustainable Travel Guide, written by Chris Johnson (Shambala Festival, Powerful Thinking & Energy Revolution), explains the impacts of event-related travel and offers festivals and events practical solutions to start reducing the impacts of audience and supplier travel. The Guide is part of the resources that Energy Revolution offers to festivals and events in calculating, reducing, and balancing CO2e emissions from audiences, suppliers and artists.

Download your copy of The Energy Revolution Sustainable Travel Guide

Energy Revolution has enabled festival audiences to balance over three million travel miles so far with balancing donations being invested in renewable energy projects in India (wind power and reforestation) and Bristol (solar).

It’s easy and free for festivals to sign up to become a member of Energy Revolution – members receive further resources and guidance on making audience travel more sustainable including use of the Travel Carbon Calculator, help in setting up carbon balancing for their audience travel miles and an annual certificate celebrating the miles and kgCO2e they have balanced. 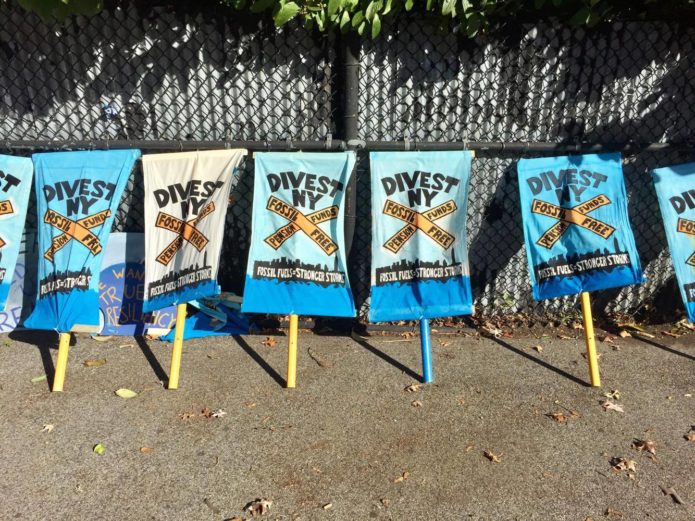 In the year since the election of That Person Who Should Not Have Been Elected, I have experienced, like many others in the States and beyond, a whirlwind of emotions: rage, worry, defeat, confusion, exhaustion, hope. I have been to theatrical events which have both evoked these feelings and expanded my empathy for people who voted in a way I thought unthinkable. I have gone out into the streets in protest more times than I have in all my previous years combined. In this moment of anniversary, I am focused not on the destruction that has been done at the hands of my government, but on the communities I’ve been a part of, on the insistence on justice, and on my reinvigorated connection to people and the land we share.

One year ago, I worked with Theater In Asylum on the The Debates, and wrote pre-election thoughts here. On that election night, my Debates collaborators and I formed the political theatre collective Back to Work, as a support network. Together we marched on Washington, built a Feminist Flashmob, and most recently, staged a reading of Sinclair Lewis’ It Can’t Happen Here from 1936. As part of nation-wide readings, Theater In Asylum and Back to Work collaborated on an evening of Lewis’ play with fundraising for relief efforts in Puerto Rico.

In It Can’t Happen Here, the editor of a liberal newspaper in small-town Vermont witnesses the rise of a populist, anti-labor, militaristic politician, all the way to the presidency. The editor and his family discover just how quickly fascism spreads, violence reigns, and the free press is silenced. A clear turning point is when the editor is forced to turn his position at the paper over to a member of the new administration. Lewis also looks at the education – or indoctrination – of youth as the grandson of the editor flaunts a uniform of the militaristic president’s party.

While the play certainly dates itself through pre-World War II references, the parallels to our current governmental situation – 80 years later – is uncanny. I was reminded of current events, littered with “fake news” buzz and political leaders acting against the interests of the people. The propaganda spewed by the president in Lewis’ play is reminiscent of Trump’s tweets. It is happening here. But, fortunately, rising fascism is being met with a persistent public voice clamoring to tear it down (especially as we’ve seen in last week’s legislative and gubernatorial elections)! In my experience of hearing the play, with a room full of people from all backgrounds, I felt the act of our collective resistance. When divisive and destructive energies occupy seats of power, I honor spaces of compassionate, receptive, and joyful energy as persistence.

This Fall also marks the fifth anniversary of Hurricane Sandy. While I was not living in New York at the time, the reverberations of the superstorm have been present in my two years of being here: from the subways, to rainwater management, to community organizing for the most vulnerable New Yorkers, often people of color affected by sea level rise from Brooklyn to Upper Manhattan. That is why on October 28th, I joined five thousand fellow New Yorkers to march across the Brooklyn Bridge. We marched in commemoration of the lives affected by Sandy as well as by this year’s disastrous storms in Houston, Florida, and Puerto Rico. The Sandy5 March indicated that New Yorkers remember, and recognize the link between policy and climate change. We do live in a progressive city, but there is still room to create more sustainable and just policies for more residents.

As my friends and I marched, we enjoyed the abnormally-sunshiny late-October sun, the beats of musicians around us, and new and familiar chants. Turning the corners through Lower Manhattan, with more room to move and groove, the Sandy5 March brought a literal dance party into the streets. This instance of public, collective joy was so inspiring to me. I marched with people I knew, but at the same time saw thousands of unfamiliar faces, brought together by similar intentions.

I am propelled to keep moving, and re-energized by large public demonstrations like the Sandy5 March. I am also invigorated by the transmission of knowledge through international gatherings such as COPs (Conference of the Parties). As followers of this United Nations climate summit know, the 23rd Conference is currently underway in Bonn, Germany. It was two years ago, at COP21, that the Paris Climate Agreement was signed. Since the Trump administration’s rejection of the agreement earlier this year, state, local, and business leaders have stepped up to show the rest of the world that the United States still intends on being part of global efforts toward sustainability. Adding to these efforts, I am convening with local artists and friends as part of Climate Change Theatre Action, around art and conversation and food. These happenings are resistance, in the face of an authority that attempts to tear us apart. We will see what this COP brings. Regardless of what corrupted power does or says, the people, united, will never be defeated.

Take Action
Climate Change Theatre Action 2017 is in its final week. Find an event near you.

Join one of many campaigns for a resilient and renewable New York. Find out about the policy demands of the Sandy5 March here.

Tweet in support of the US People’s Delegation at COP23 in Bonn, Germany, and populate Twitter with demands to Trump for climate action.

Julia Levine is a creative collaborator and vegetarian. Originally from St. Louis, Julia is now planted in the New York City downtown theatre realm. As a director, Julia has worked on various projects with companies that consider political and cultural topics, including Theater In Asylum, Honest Accomplice Theatre, and Superhero Clubhouse. She is on the Marketing team at HERE Arts Center and is a co-organizer with Climate Change Theatre Action. Julia writes and devises with her performance-based initiative, The Food Plays, to bring questions of food, climate, and justice into everyday life. 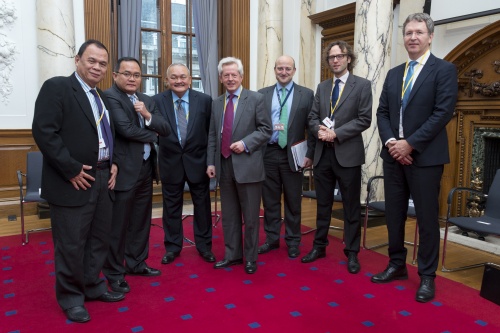 Aligned with COP23, on 14th November 2017 at Her Majesty’s Treasury London: political leaders from South Sumatra Indonesia met with UK government representatives at the launch of a 25 year business and research collaboration on zero emission mobility & low carbon energy between the Province of South Sumatra and UK infrastructure innovator Ecubes Arcola.

The Governor of South Sumatra Alex Noerdin and Regent of Muba Regency Dodi Reza met with Foriegn Office Minister Rt Hon Mark Field MP and the Prime Minister’s Trade Envoy to Indonesia Richard Graham MP in the historic Churchill Room at the Treasury at the event hosted by Ecubes Arcola.

With engineering suppliers in the UK and PT-PP, a leading Indonesian state-owned construction and investment company, Arcola Ecubes will deliver a rolling 25-year programme of clean and low carbon infrastructure projects in power generation and mobility.  The first two projects announced will be hydrogen zero emission mobility at Jakabaring Sports City, Palembang, for the Asian Games 2018 and a 10MW clean power generation project in Muba Regency.