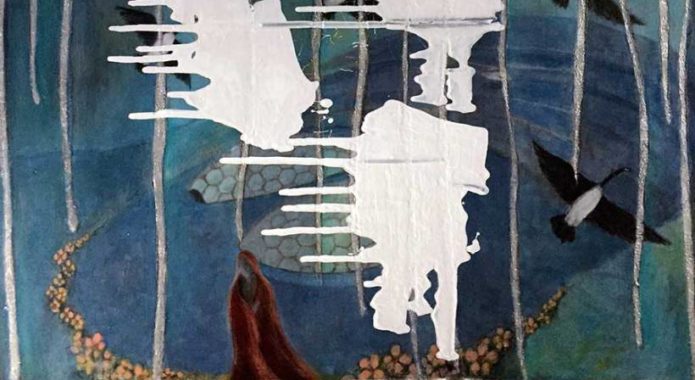 Of mice and men. Mice may lay plans better than politicians in the United States these days.

For the last four years, I have been working intensely on issues of climate change. Not as a scientist, but as an artist—peering into a complex issue and trying to help redefine our future. My love for nature has long crept into my work though for the most part, I have remained an observer, a watcher, not an activist now woken up and horrified at what humans have done and are doing to our beloved planet: war, the pollution of our atmosphere and oceans, speciesism and the agriculture revolution gone awry.

If one looks carefully enough, one begins to see that all that we do now, all the preparation, all the planning, is basically for the future—or more pointedly, for those who own that future, our descendants. Our culture substantially defines itself in terms of who has money and power, but cultural influences persist over a greater arc than the span of one person’s life. We need to create a culture of sustainability that will endure. Leaders in politics, industry, commerce and trade must wake up to the fact that we are at a turning point, a juncture; we cannot base everything we do on money—we do not own the earth, it belongs to all creatures. There is no “dominion over earth for humans.” We can’t survive without the trees, the flora and fauna and all the countless other creatures that inhabit this earth. Our culture needs to align more closely with this reality.

After attending two of The Climate Reality Projects conferences, and both reading and listening to countless books on climate change, I decided to focus on solutions. The debate was over. I began to sort through all the problems I could identify: Is it our love of money/greed that prevents us from recognizing the problem and doing something about it? Is it something in our nature? Is it by accident? Is this a case, truly, of our best-laid plans going astray—and is it all a terrible accident? The industrial revolution wasn’t meant to poison our atmosphere and pollute our waters. Penicillin was meant to save lives not create a world filled with 7 billion hungry people. Nobody wants war, but we have it anyway. Why? We are a social species; we count on each other and care about what we all think and do. We are separate but connected. No person is an island and no one person can take full responsibility for our climate problem so we must take collective action through the mechanisms put in place by government and industry.

Climate change is a systemic problem. Our food sometimes comes from halfway around the world, as do our shoes, clothes, and so on. It takes so much oil and gas to transport our stuff. We wanted to go fast; now we are going fast, and can see where things are heading. We should all be concerned.

But maybe, just maybe, there is a way that our climate problem isn’t all our fault. Maybe there are bigger cosmic laws at work here. Wouldn’t that be nice? Except there is no way to know. We have to rely on facts and if 99% of climate scientists say we are the cause, then I’m going to go with what the experts say. Because who wants to take a chance with the one planet we have? I want to have my eyes open so I can see the truth, even if it hurts.

In my painting Best Laid Plans, I first painted a landscape thinking of all the solutions I’d researched: alternative transportation systems, such as SkyTrans (a point to point mass transit system), solar and wind power, earth houses, hydroponics, and so, so many other. There are so many people working on remedies to our collective malady, trying to help define a future where we can thrive. Then again, it’s important to recognize that our best laid plans, whether we are mouse or man, often stray from their original intent, for better or for ill. The future is an open book, unwritten, undefined, existing only in our imaginations. When nature throws you a curve ball, or in my case, masses of white paint, I look for the silver lining.

This straying from the path has hidden power, a potential to redefine everything. While we can’t know what the future holds, we can do our best to live in harmony with the only planet we have.

If mantle plumes under Antarctica don’t melt the ice and flood our coastal cities, and if people manage to subdue their egos long enough to realize that we are all in this together, then maybe we can start to design a restored world.

It really could be beautiful.

Below are some references to consider. They are just a few of the exciting new technologies that are being developed. There are so many more. Let’s open the door and let the future in. It’s right there, waiting for us.

SkyTran: I would love to see bike paths, gardens, and places for children to play instead of roads. Roads cost a lot. Maybe in urban areas we could phase them out?

Solar pathways and plazas: After roads for cars have disappeared and been replaced by solar pathways for biking, walking and roller skating, we’ll be able to get outside and enjoy cleaner air.

Earth Houses: I love this collection of Earth Houses on Pinterest. If you want to feel like you’re in a different world visit Solaleya; these living spaces make me want to jump up and down and yell for joy. Finally, these Monolithic Dome houses withstand the forces of nature and can be beautifully integrated into the landscape.

Geodesic Domes: If we can design systems that leave nature alone and maximize the spaces we have for growing food, it is a win-win situation!

Belinda Chlouber is an artist who works with mixed media, acrylic painting, fabric, machine embroidery/stitching, and printmaking. Her work has been exhibited nationally and internationally, in addition to being held in private and public collections. She received her BFA from Kansas City Art Institute in Missouri and later continued her studies at Parsons School of Design in New York. Her work, which focuses on the acceptance of growth and transformation through change, was greatly influenced by the settings of her youth which included Oklahoma, the Navaho and Hopi reservations in Arizona, and Nebraska. She now lives and works in San Mateo, California.