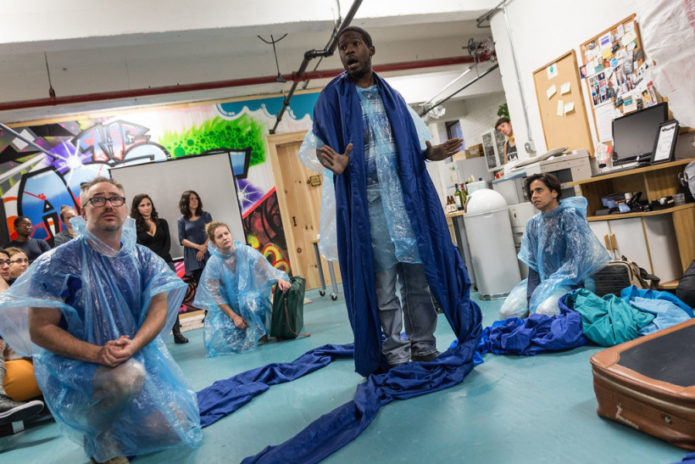 Climate Change Theatre Action 2017 is officially LAUNCHED! As of last Sunday, October 1st, communities and individuals around the world have started hosting events and conversations on climate, using this year’s curated collection of 50 short plays. The energy from these events is contagious – even though we can’t be at all 250 events, each one is sending a pulse into the world to persist in the face of corruption and apathy. That is inspiring.

On Sunday, we – Chantal Bilodeau and I – presented The New York Launch at The Artist Co-op, to kick-off this year’s global action and to celebrate local artists working on climate. The evening was full of quirky performances, and mingling between new faces and old friends. It was fascinating to see people of varying ages, from all over the city, come together, to support climate, performance, and community – and to raise funds for hurricane relief efforts in Houston. It definitely set the tone for what will be an energizing seven weeks!

As part of the Launch, I directed a few CCTA plays, and invited local artists to share some of their work on climate. We had a variety of performance genres, from artists of various backgrounds. It was serendipitous to see and hear how, through the performances, there was something for each and every audience member to connect to.

The evening started off with comedy from Willie Zabar, who brought his character Heimi Wilhelm, the famous German musician and thinker. Using prompts from the audience, Heimi explained his positions on topics of nature using words and music. It was a fun, light, interactive way to start the evening, and directly engage everyone in the room. Upstream Artists’ Collective also engaged audiences directly, breaking down our broken socio-political systems, by inviting an audience member to literally break a chair. After a collective brainstorm on how to best break the wooden chair, a gray-haired woman in the front row jumped up to make it happen: she smashed that IKEA chair until it was in building-block form. It was goofy and experimental, with immediate implications: the audience member sitting in the wooden chair lost her seat, the chair was rendered un-sit-able, the audience rallied behind the woman pulling apart the chair.

I’ve felt this kind of energy before, the energy of individuals rallying together, overtly or subconsciously, for a singular purpose. It was similar to the energy I’ve felt during marches and while watching some of my favorite shows. This energy continued throughout the night, as The Anthropologists and Lynn Neuman of Artichoke Dance Company performed. The Anthropologists presented an excerpt from their upcoming This Sinking Island, which features text, movement, and music performed by a small ensemble. With their blue fabrics and plastics, the ensemble transported us to a place surrounded by water. Lynn also transported us, juxtaposing rustling plastic bags and recorded instrumentals by Mike Sayre. Her piece Precipice evoked at once the experience of plastics, and of organisms and places implicated in the consumption of plastics. So, even though our evening took place in one room, the performances transported us, collectively, to alternate times and places.

Threaded through the entire evening were the CCTA plays: Brackendale by Elaine Ávila, Rube Goldberg Device for the Generation of Hope by Jordan Hall, Single Use by Marcia Johnson, Kleenex by David Paquet, and Magical Vagina by Catherine Léger. What I found in delving into these short plays is depth. It is amazing how many layers can be packed into a five-minute play or monologue. My collaborators and I delighted in the playwrights’ varying perspectives on human-induced climate change. In duologues like Brackendale, Rube Goldberg…, and Magical Vagina, we found examples of dichotomous ways of dealing with climate realities: unshakeable hope, or dire pessimism. These two approaches manifest through the varying circumstances of each play, leaving room for audiences to place themselves on the spectrum: with enough pessimism to feel the urgency, and enough hope to do something about it.

Through Rube Goldberg… in particular, audiences were required to do something. Nearing the end of the Launch, two performers, Atiya Taylor and Megan Oots, set up a Rube Goldberg Device with the audience, passing out instructions on slips of paper. Each instruction was contingent on something happening before, prompted by a different instruction given to another audience member. Ultimately, the whole sequence should lead to a dance party. Atiya, Megan, and I had rehearsed the play, and I could see and feel how the Rube Goldberg Device could work, but the circumstances of the evening led the Device down an unexpected path. Some audiences were so eager to follow their instruction that they couldn’t wait until the required prompt. Many audience members were confused, but by the time the dancing started, they were good sports and joined in. From this experiment, I learned how to set up circumstances as clearly and simply as possible to then allow for the audience to build the Device, to contribute to chaos. Nonetheless, it was wonderful to see the audience shamelessly participate in breaking the traditions of what a play is or should be.

The evening culminated in a Skype call to Toronto, who was starting their Launch event as ours was winding down. We introduced the New York and Toronto playwrights present at each event, and virtually passed on the baton. It was brief, but effectively broke the New York bubble, and placed our Launch more tangibly within the context of something way larger. Before we parted, Ryan Little Eagle Pierce, who performed “Eagle Warrior,” a piece of poetry set to movement describing one American’s transition into his Lenape roots, brought a vital context to our event, acknowledging the traditional caretakers of the land that Manhattan is now on, the Lenape people. Ryan helped us to connect our care for our environment to our care for one another, effectively tapping into everyone’s compassion for the new and old friends we all shared the evening with.

Take Action
It’s not too late to join CCTA. Check out our Call for Collaborators and host a gathering in your own community, NOW through November 18!
New York City: It’s the fifth anniversary of Hurricane Sandy. March to remember, rise, and resist at the Climate March on October 28.

More CCTA!
I was recently on the Let’s Talk About the Weather podcast, with Ashley Mazanec of EcoArts Foundation. Listen here, for more about CCTA!  Visit climatechangetheatreaction.com for all the upcoming events this season, and to learn how to host your own.