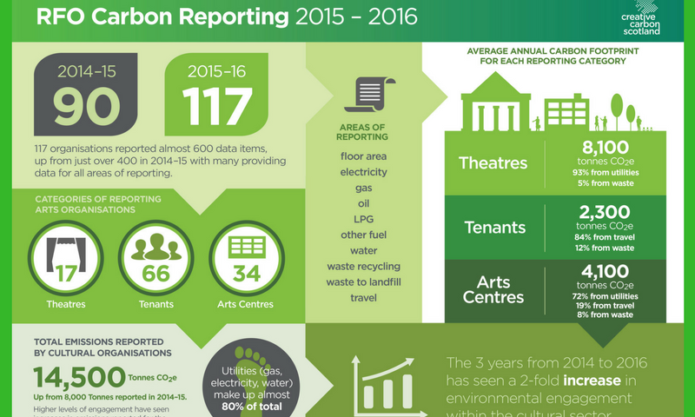 Since 2014, environmental data – including carbon emissions associated with travel, energy and waste – has been submitted as part of the annual reporting process for Creative Scotland’s Regularly Funded Organisations, becoming a compulsory requirement in 2015 –16.

Over the three years for which reports have been submitted the quality of the data provided has improved substantially, reflecting increasing environmental confidence and carbon literacy in the sector.

In 2015 – 16, significantly more organisations submitted carbon emissions information, with 117 reporting compared to the previous year’s figure of 90 and a 31% increase in the amount of data reported.

This increase in reporting has also increased the overall reported carbon footprint from 8,000 tonnes CO2e in 2014-15 to 14,500 tonnes CO2e in 2015-16. This isn’t because there was a sudden rise in carbon emissions, but because of better and more confident reporting by the larger number of organisations. Such a rise is comparable with other sectors which have introduced carbon reporting and is likely to continue until reporting is well-established.

In particular, the reporting process gathered more data in 2015-16 and more of the data was based on actual recorded figures rather than estimates. As a result the figures from the reporting can be considered more accurate and relevant for identifying areas where future carbon reductions can best be achieved.

Theatres reported the largest overall emissions figures, with around 8000 tonnes of CO2e, comparing with 4000 tonnes from Art Centres and 2300 from organisations who rent their working spaces.

73% of the data from theatres were actual figures, while from art centres and tenants 64% and 46% respectively were actual. As tenants often have little or no involvement in the payment of utilities, reporting inevitably becomes more estimate-based and reporting rates are lower.

“It’s very encouraging to see the increasing sophistication, consistency and engagement of cultural organisations in reporting their carbon emissions. In particular, the increase in overall data submitted, and the proportion of data derived from actual rather than estimated figures, highlights the commitment these organisations have to their sustainability goals. With better and more detailed information we can make better decisions on how best to help Scotland’s cultural community continue their hard work in this area.”

“Creative Scotland welcome this report from Creative Carbon Scotland and we thank all the organisations who have contributed to it by recording and submitting their data. It’s great to see that, as a cultural sector, we are taking our carbon reduction responsibilities seriously and this report is testament to that. It also enables us all to make informed decisions about how we operate in the future, so we can continue to minimise and reduce our environmental impact and be as environmentally sustainable as possible across the arts, screen and creative industries.”

This year’s data will help the sector move on to stage two of the programme when Creative Carbon Scotland will be helping organisations with Carbon Management Planning to reduce emissions relating to their future projects. CCS will continue to support RFOs to improve reporting levels and to make the most of the information gathered to benefit their organisations and sustainability ambitions.

The full version of the 2015 – 16 report is available to download here.

Press Release for Carbon Reporting 2015 – 16 is available to download here.