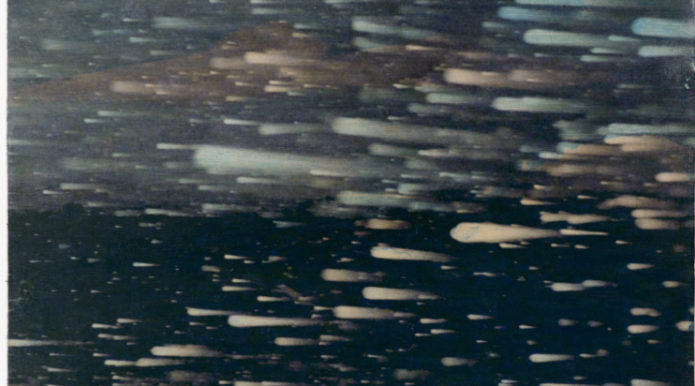 Irish painter Siobhan McDonald often collaborates closely with scientists in the creation of her work. Her sources of inspiration over the last few years have included early seismographs made by Irish Jesuits in the 1920s, the role of atmospheric oxygen in plant evolution over the past 400 million years, acoustic signals coming from the Eyjafjallajökull volcano in Iceland, and a set of 350-million-year-old Irish coral fossils. These collaborations have also led to the use of unusual materials in her work, such as crushed bones, prehistoric charcoal, and iron gall ink.

What are some of your influences?

I always wonder what is at the edge of the universe. I think about creation and our place within the living ecosystem of our planet. It might seem an enormous subject to tackle with art, but in my projects I like to consider disciplines like physics from an artistic point of view, and to think about the larger context in which the Earth exists. Working with the Herbarium at the National Botanic Gardens and their incredible collection of seeds that hold the answer to most of the mysteries of creation is a real privilege – they are a powerful symbol of life. The artists that I’m most lately drawn to include Giuseppe Penone, Wolfgang Tillmans, Olafur Eliasson, and the supreme painter Peter Doig.

How do you merge the poetic and the scientific in your work?

It’s not something I set out to do. A case in point is ‘A change in the Signal,’ one of the works in my current exhibition. Last year I found an old drawer in the Physics Department where my studio was located. Inside, tiny crystals had begun to form – traces of a myriad of chance chemical reactions that had taken place since the 1950s. Over subsequent months, I built up layer upon layer of paint on the rough old surface of the wood – in places, just light washes of color; in others, thick, textured smears applied, scraped back, and re-applied. The original crystals shimmer just beneath the surface of this fluid landscape. I was reading about Henri Becquerel’s chance discovery of radioactivity in 1896 and it had an important influence on this work in particular. Painting as a form of alchemy, as a process that transforms our understanding, is what I do.

What do you see as one of your biggest successes, either artistic (a piece you’re particularly proud of) or in terms of impact (reactions to your work)?

My current show Crystalline – I’ve been working on this for some years now, so it’s very exciting to see the work emerge in a solo show, which opened at the Centre Culturel Irlandais, Paris last month and runs until March 12th. It’s extraordinary that the story of the 1845 Franklin Expedition only hit the headlines last year, because I’m including a set of 190-year-old seeds that came from the previous Franklin expedition in 1825. They join my series of paintings that draw on the deeply embedded natural world which holds all the secrets of our existence. Other works are ranged around objects using space technology alongside an especially composed sound piece by Irene Buckley with actual sounds I recorded in the Arctic Circle.  I want the visitors to the exhibition to delve into what comes from our natural world and its history, in this collaboration with European Space Agency and the Millennium Seed Bank.

What is the single most important thing artists can do to address climate change?

Artists have a role to play in alerting people to certain situations in a way that scientists cannot. In following a process of enquiry, many other enquiries emerge – my exhibition in Paris is certainly a point of resolution of some of these, but many other stories have opened up, and the interconnectedness of the parts has been astonishing. I am realizing the power of expression that visual art can bring in unleashing the potential infinity encapsulated in a given story.

As Buddhist philosopher Daisaku Ikeda wrote: “Buddhism teaches that the same power which moves the universe exists within our lives. Each individual has immense potential, and a great change in the inner dimension of one individual’s life has the power to touch the lives of others and transform society. When we change our inner determination, everything begins to move in a new direction.”