Some Kind of Nature 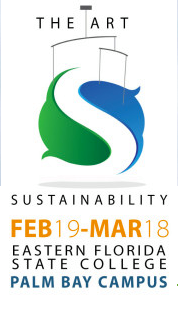 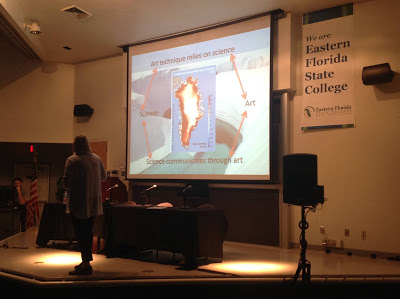 Wendy Anderson gave a presentation on her perspective as a biologist of the unique ways in which artists and scientists are similar, and how these characteristics offer opportunities for both domains when using the imagination to solve the environmental issues at hand. Keynote speaker Chad Pregracke gave a presentation of his 18-year ongoing effort to clean up the Mississippi River, including 856 clean ups of 23 rivers with 93,000 volunteers. He also shared with us images of his low tech/high tech barge that looks like a great opportunity for artist residencies on the Mississippi. 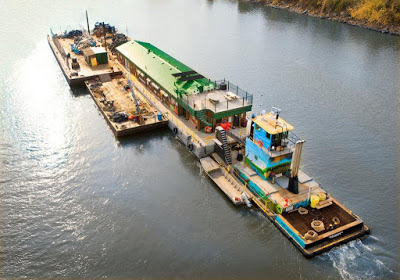 Florida’s habitat ecoartist Jesse Etelson was also involved and presented an interactive habitat sculpture made of driftwood for families of the sustainability Community Day! And, Patricia Watts of ecoartspace presented site projects that employ wind, water, and solar including both proposals, and permanent and temporal public art works such as Windsock Currents at Crissy Field in the Presidio, which she sited for the UN World Environment Day in 2005, and Cloud House that she curated for Farmer’s Park in Springfield, Missouri working Matthew Mazzotta in 2015. Other projects included Mags Harries and Lajo Heder’s Sunflowers in Austin, Texas, and proposals from the 2012 and 2014 Land Art Generator Initiative competitions, as well as Buster Simpson’s waste water cisterns, Betsy Damon’s Living Water Garden, and Eve Mosher’s HighWaterLine. Her talk wrapped up with a work she feels is long overdue to be implemented, Andrea Polli’s Queens Bridge Windpower Project, and then in contrast, the bloated $15.5 million dollar unsustainable work by Olafur Eliasson, NYC Waterfalls. The title of her talk Some Kind of Nature was borrowed from the song by the Gorillaz.

There was a closing panel on Saturday discussing climate science with a couple members of the audience questioning the data and the validity of climate change. It was apparent that this is an area where the sciences can benefit from the arts in presenting the data in order to help the general public understand the science. There is still much work to do! 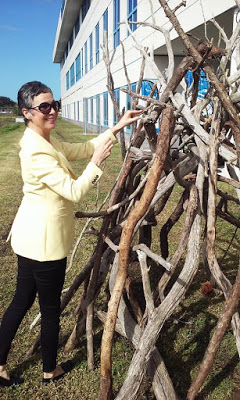 This past December, representatives of 195 nations came together in Paris to forge a landmark agreement designed to rein in global warming. The gathering, known as COP21, or, for the long winded, the 21st Conference of Parties to the United Nations Framework Convention on Climate Change, put in place a series of regulations meant to save the planet from rising sea levels, destructive storms, droughts, floods and, you know, extinction.

In short, the COP21 delegates agreed to:

Lower pollution levels so that the rise in global temperatures is limited to no more than 3.6 degrees Fahrenheit, that being the point at which scientists believe serious devastation would kick in.

Limit greenhouse gases emitted by humans to the same level that nature can absorb naturally, beginning at some point between 2050 and 2100.

Review each country’s contribution to cutting emissions every five years.

You can read the full 31-page agreement here.

Clearly, these are mega-initiatives with a global scope and a century-wide timeframe, so, how should we, as a community of theatre professionals, react in the here and now? How might COP21 affect the performing arts, both from the practical aspect of producing a show, and from the standpoint of providing creative inspiration for new works of environmental theater? We reached out for advice and examples from some experts. And, since this is a worldwide initiative, we cast our net internationally.  The responses have been intriguing and we will be sharing them with you in blog posts over the coming months. First up, a call to arms from Brussels and from London:

Ilse is based in Brussels and is the Coordinator for IMAGINE 2020. She points to the usefulness of cooperation among arts groups, and the importance of making your message heard: “We believe it is important to share with the audience our concerns about what is going on in the world and how we can make things change.” Her organization has certainly done just that. They began, in 2007, as a group of six European theaters, gathered under the name Thin Ice, with the aim of spreading environmental responsibility in the theater world. Today, IMAGINE 2020 is made up of 11 arts organizations spread across nine European countries. From 2007 until 2013 they mainly commissioned and presented works of environmental theater and encouraged sustainable practices in theaters and cities. The last few years their focus has been more on “communication about the future of our planet through art, imagination and debating.” As explained on their website, they want to “engage the European cultural sector and use its creative potential to raise awareness, involving the general public both as audience and as participants. Art should provide a physical and imaginary space where people can take a step back, away from the corporate, the commercial and the educational, to exchange and engage with each other.”

Lucy is Program Director for Cape Farewell, a London-based non-profit. Working internationally, they bring artists, performers, educators, journalists and scientists together to “communicate on a human scale the urgency of the global climate challenge.”

Last September, Cape Farewell and French partner COAL launched a global arts festival calledArtCop21. Lucy explains, “ArtCop21 sought to engage with hundreds of thousands of members of the public in a more human, visceral way. Climate change is too often viewed through a policy or scientific lens. ArtCop21 aimed to challenge this trope, arguing that climate is very much a people problem – not one to be left to solely the politicians. Indeed it is the biggest ‘people’ problem we’ve ever faced. But the biggest challenge is to move people to care in the first place because denial is a powerful thing, particularly when faced with what feels like an impossible task.

“ArtCop21 exceeded expectations and built up an enormous cultural momentum – numbering a total 551 events in 54 countries. The festival brought a huge and inventive array of offerings, from a concert in the Arctic Circle featuring Led Zeppelin’s John Paul Jones to a street art exhibition in Benin, Africa.

“The festival sought out work that uses creativity to reframe the catastrophic, negative language of the climate battle into an opportunity for positive change. The thousands of voices involved in ArtCop21 argued that we need is a major cultural shift in the way we produce energy, consume, exchange and work and ultimately define ourselves and our culture. We need to move to a post-carbon culture and economy; and fast.”