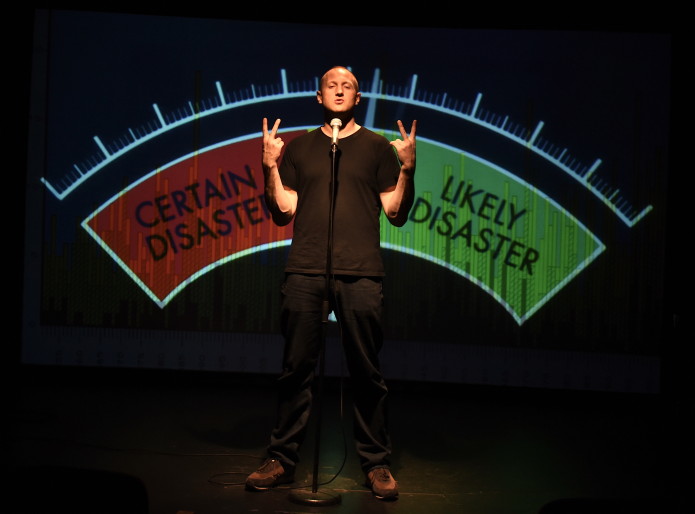 Rhyming Science Over a Street Beat

A rapper is perhaps the last person I would expect to tell me about our global environmental issues. Yet rap can be a powerful tool for communicating  the politics, economics, and science of climate change. That’s what I learned after seeing Baba Brinkman‘s latest show The Rap Guide to Climate Chaos in New York City a few weeks ago. There is something exhilarating about rhyming such a dry subject over a street beat and delivering it with the high energy usually reserved for lowbrow topics.

Baba graciously accepted to answer a few questions for Artists And Climate Change:

How did you get into rap?

I was into writing poetry as a teenager, and rap was the music we all listened to, but for some reason I saw rap and poetry as separate things. I was already a pretty good writer when I started college, but I couldn’t see how poetry would ever support me or help me connect with a significant audience of my peers. Then around age nineteen I tried writing some poetry based on the rhyme and rhythm patterns of rap, and before I knew it I was writing rap lyrics. That’s eighteen years ago now and I’m still hooked.

What can rap accomplish in terms of communicating climate change that other art forms can’t do as well?

Rap songs are packed with mnemonic devices, rhymes, hooks, melodies, rhythms, all designed to get the song stuck in your head, so they are naturally a great way to distill complex ideas into a memorable form. Also, rap as a genre is infused with confidence and swagger, and climate science needs a shot of adrenaline to drive home its core messages, which are actually pretty astonishing when you confront them head-on. As I say in one of the songs: “You want a new definition of ‘hard core’? Check out the intergovernmental climate report”

You presented Rap Guide to Climate Chaos at COP21. How was that experience? What was the reception?

It was amazing to be there in the midst of the negotiations and see the wheels turning and the process of international climate diplomacy at work, although of course much of the time observing negotiations is like watching paint dry. The result was exciting and the sense of being part of history was exciting, but the nitty gritty was a mix of fascinating and tedious. That’s probably part of why the response to my performances was so enthusiastic, because I was kind of a “pop up rapper” at the conference, there to inject some levity into an otherwise heavy atmosphere. Rather than a single scheduled show, I was invited to perform at multiple events, usually for audiences who didn’t expect me to be there, which definitely raised some eyebrows and snapped a few people out of their torpor. Here’s a blog written by some German students who randomly caught one of my shows, which gives a good sense of how most people responded. 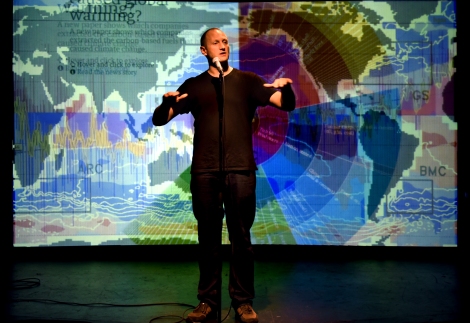 What is the single most important thing artists can do to address the problem of climate change?

The problem has historically been stalled by a lack of political will, so artists, especially famous artists, can play a major role in signalling to their fans and supporters that this is a major issue and it needs to be confronted. Not everyone will apply their creativity directly to climate issues as I have done, but wherever possible it’s important to bring the issue to the forefront and be provocative about it, forcing people to face the facts honestly instead of resting on false consolations and complicity.

The people I meet at my shows who share my desire to raise the alarm, and the sense that the tide is turning and denial of climate change is an increasingly fringe position. 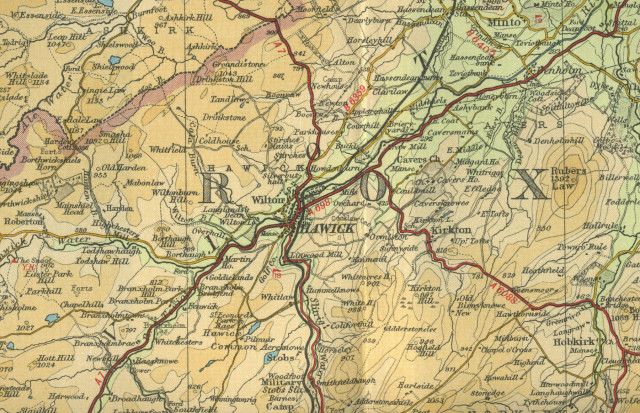 A unique opportunity has arisen for a Project Artist to work closely with the engineering and project team around the Hawick Flood Protection Scheme (HFPS) and engage communities in the development and design of proposals which can be taken forward within the scheme.   The key priority of the HFPS works is to protect the town from the effects of a ‘1 in 75’ year flood event on the River Teviot, but the works also offer opportunities to incorporate imaginative place-making proposals, including for permanent public artworks, which can be taken forward into the second phase of the HFPS.

This opportunity has been enabled through a partnership between Scottish Borders Council, CH2M (scheme engineers) and the Creative Arts Business Network (CABN), and has already involved initial engagement with community groups around potential proposals.

More information is available on the CABN website – http://www.cabn.info/opportunities/project-artist-hawick-flood-protection-scheme.html 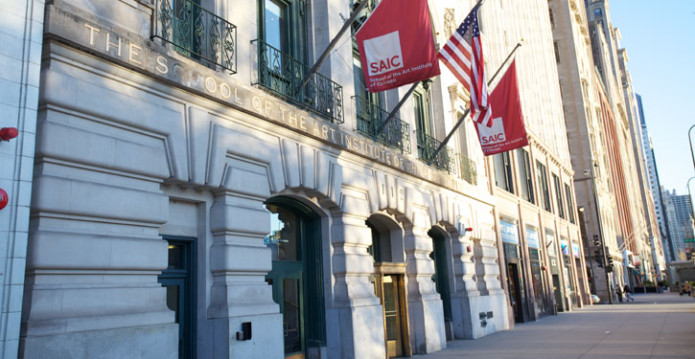 Job: Sustainability Coordinator at the School of Art Institute of Chicago

1. Competition Coordination – Develop, plan, coordinate and implement activities including, but not limited to, Recyclemania, other competitions and programs related to sustainability at SAIC. Both the manner in which these activities are organized and the nature of their content should be geared towards achieving buy-in and habit transformation from student, faculty and staff community members.

5. Reporting and Planning – Work with community stakeholders to submit SAIC’s annual Greenhouse Gas Emissions Report, as part of the schools Carbon Commitment, as well as compiling information for Chicago’s Energy Benchmarking Ordinance. Collect and track energy data for such reports. Lead the SAIC community in developing a Climate Action Plan as well as AASHE STARS. Coordinate efforts to establish and report on a Resilience Commitment. Create process for updating plans and reports on annual basis.

7. Accounting and Budget Tracking – Assist in the preparation of budgets and grants; monitor, verify and reconcile expenditure of budgeted funds as appropriate.

Perform other related duties incidental to the work described herein.

The position is full time M-F. Located in SAIC.

The Art Institute of Chicago is an equal opportunity, equal access employer fully committed to achieving a diverse and inclusive workplace.

You can find the original post by CLICKING HERE 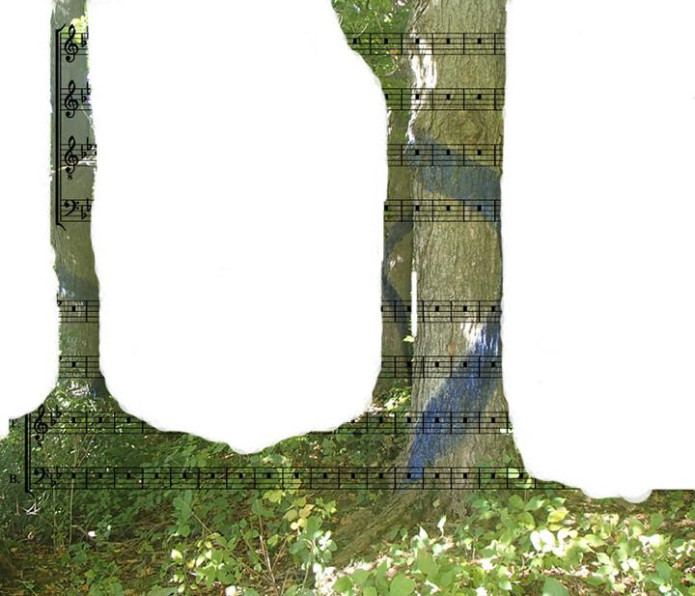 From Friend of the CSPA Aviva Rahmani:

We are also thrilled to report that the Blued Trees Symphony has received a generous grant from the Ethelwyn Doolittle Justice and Outreach Fund from the Community Church of New York Unitarian Universalist. The $2,500 grant will be used to help support the legal work to protect the Blued Trees Symphony under threat of demolition, where people’s private land is being seized under eminent domain by fossil fuel corporations. Please make a contribution here that would go towards matching this grant, covering our legal costs.

The Blued Trees Symphony could help protect the planet from dangerous methane emissions by setting legal precedents with a network of connected art! Proliferating natural gas infrastructures across the United States (and globally) significantly contributes to climate change.

The overture copyright was registered, but Spectra Energy destroyed it anyway. Now we want to hold them accountable with a new legal strategy. Your support for that legal framework would protect the Blued Trees Symphony from further destruction and hold Spectra Energy responsible for the damage they have already done.

Please give as generously as you can to win this fight. We believe that with your help, our creative approach, a celebration of beauty, trees and natural lands, we can prevail against toxic fossil fuel expansion and establish a new paradigm for our times.