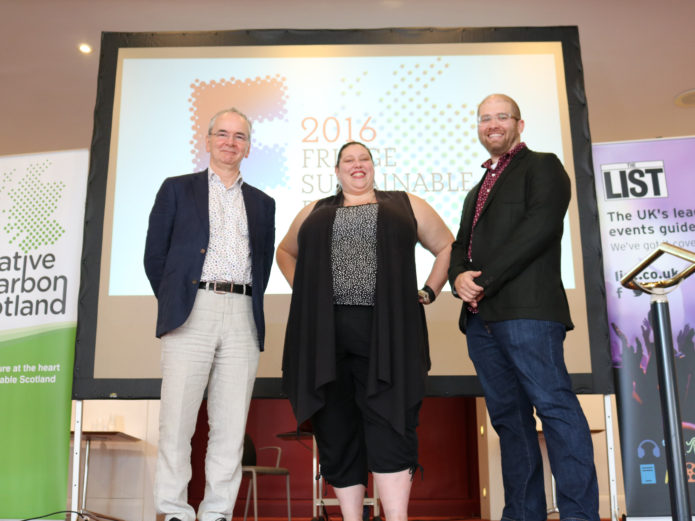 This post comes from Coral Mallow: the artist we commissioned this summer to craft the Edinburgh Fringe Sustainable Practice Award. Here’s what she has to say about her process. The Edinburgh Festival Fringe! It is an exciting time to be in the city with it’s candy wrapper costume of theatre posters and the possibility of art literally and figuratively around every corner and close. For an entire month!

With such an extensive celebration however comes much waste in promotion, tourism, and production needs. Rather than approach this issue negatively Creative Carbon Scotland chose to create an award to congratulate those productions that had a combination of low environmental impact and innovative production speaking to sustainability problems and solutions. My name is Coral Mallow and I’m here to tell you about the making and thought process behind the creation of the 2016 award.

When I applied for the commission I was already thinking of some things that I would have to keep in mind. The performance that won might not be local as we get troupes and performers from all over the world. As anyone who has flown lately knows weight restrictions on luggage get stricter all the time, so creating something lighter as an award would probably be preferable. As such, the performer that won might not be in Edinburgh at the time of the award giving so it would make it easier to transport or mail as well.

I also looked into the award created last year by maker Sarah Diver so also knew I would have to add logos and text. This meant I had to consider a way to accurately and clearly present that information. It also meant that it had to be separate of the body of the piece because the maker would only find out about the winner a week before the ceremony. All of this information was key to my proposal. While I work in many different mediums I chose to weave this award using a technique called twill inlay. Twill inlay allows you to create a design in a weaving by adding additional yarn to a pattern by hand. Here is a youtube link to a weaver who demonstrates the technique also using four shaft floor loom. I have a background in theatre as both performer and playwright so I looked to the history of theatre to inform my material choices. I chose to use rescued and reclaimed linen and wool yarns to create the body or the award which could then be displayed either flat or hung on the wall. The text pieces would be added and attached by hand using embroidery.

To capture the text in clarity I chose to use the services of a local women owned company in Leith called BeFabBeCreative. Using digital printing may not sound sustainable, but when you take into consideration the lack of solvents, the small business commitment to recycling, and the locality allowing me to collect via walking or bus it is an excellent option! They created the digital prints on a cotton fabric that mirrored the pattern I would be using in the weaving. The proprietors Solii and Zoe were very excited and helpful in getting the cloth printed, prepared, and to me in time for me to complete the piece for the award ceremony. The three pictures above are three of the digital designs created in photoshop that were printed and used.

Textile waste is a huge problem with a significant portion of our landfills being clothing, carpets, household soft goods such as sheets and towels and more all contribute to a growing issue around sustainability. There is a tendency towards mass disposal of materials and props during large festivals. Depending on how far some acts have traveled, and what they wish to bring home, Edinburgh can wind up with a significant increase in waste.

Artists and theater makers have long been known for their resourcefulness in reusing what society discards. Whether for canvases, costuming, or various assemblages as can be found in sculpture and jewelry, “waste not want not” is the working motto of many a practitioner. By creating a soft textile piece I speak not just to the history of the Arts, but to the Arts long commitment to recycling, upcycling, and industrious innovation.

Congratulations to VOU Fiji Dance for winning the award for their production “Are We Stronger Than Winston?”! It was a delight and an honor to create this award and I hope it brings you as much joy in the having as I had in the creating of it.