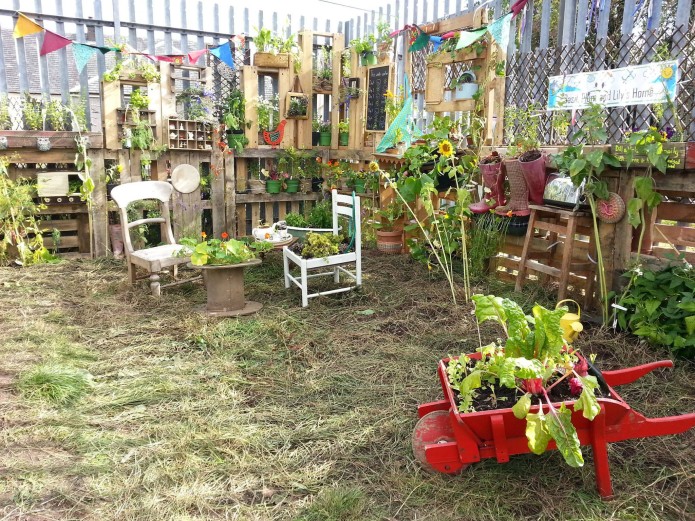 Since 2012, I have been developing a series of projects under the banner of The Living Stage, a concept which combines stage design, permaculture and community engagement to create recyclable, biodegradable and edible performance spaces. In this post, I reflect on my time working with Glaswegian Children’s theatre company Eco Drama during the development of my third Living Stage. 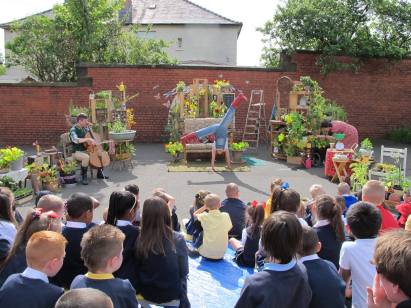 In the UK Summer of 2015, I collaborated with local theatre company Eco Drama to create a travelling garden with and for children that could brighten up Glasgow’s concrete playgrounds; fusing live performance with living plants. 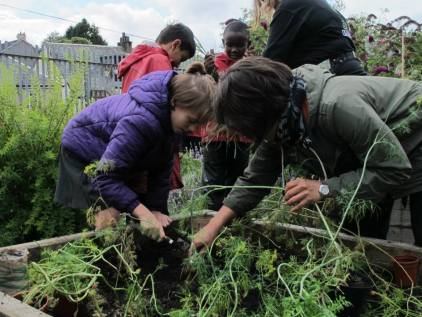 The project involved working with four Glasgow primary schools to design, grow and build a portable stage. I joined permaculturist Katie Lambert and the pupils in their concrete playgrounds in late Spring to plant out quirky containers with basil, parsley, tomatoes and carrots. Despite the dreary Glaswegian weather, the children’s enthusiasm to be outside and get their hands dirty was infectious – placing their hands into the soil was regularly met with audible ‘aahs’ and ‘ooohhs’. Even in pouring rain, there was an instinctive desire for the children to engage with the world beyond the classroom walls.

Together, we planted seeds, made willow arches and wrote plant labels for the set. As we absorbed ourselves in the act of gardening, the children learnt to gently ‘tuck’ their seeds into the ‘bed of soil’ and give the earth a ‘good drink’ of water. By the time the children left for their summer holidays, the seeds had started to sprout, turning the once humble soil into hopeful speckles of green.

Through the growing season, the director, performers and I began building a show around the budding plants, coupling storytelling with experiences of gardening. The story that emerged followed three characters (Plum, Lily and Basil) singing to the salads, flowers and herbs amongst their curious home of plants. Told through music, movement and multi-sensory storytelling, Uprooted connected audiences with nature through the view of the wider planet as home. In true Living Stage spirit, Uprooted became part theatre show, part garden and part installation, where audiences had the opportunity to nibble at the stage and sample drinks made from the set. 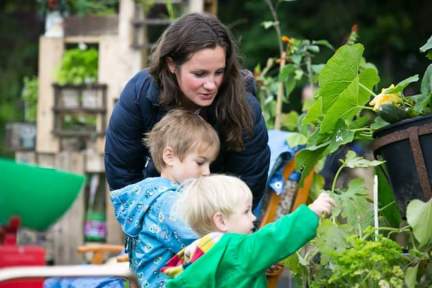 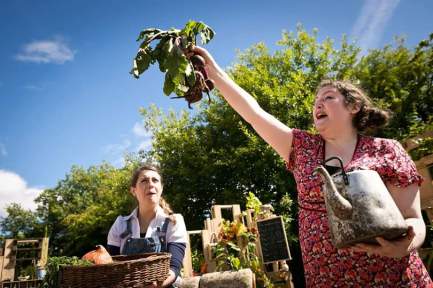 Uprooted toured to various outdoor venues and schools across Glasgow, before finding its way back to the schools that helped plant it. As the students returned from their school holidays, they watched the performance and were excited to see how much their plants had grown. They were amazed at how the plump vegetables, bushy herbs and soaring sunflowers that inhabited the set had emerged from the tiny seeds that they had planted months ago. The students revelled in tasting unusual herbs and flowers, and embraced new textures, flavours and sensations. I have never seen so many children so excited about a zucchini. But more broadly, they also shared an immense pride in the space and the fact that ‘their’ stage had been touring around their home city.
After our final showing at Corpus Christi Primary School, we turned to the task of transplanting and installing the set as a permanent feature in the playground, turning an ugly metal fence into a beautiful space for future gardening and storytelling. Again, the children became an integral part of this process, transplanting the living stage pots into the soil of their garden beds and gently ‘tucking’ the greenery into its new home. This time, I witnessed an even greater eagerness to be in the garden and contribute to the next phase of the growing. There was clear comradery and confidence amongst the group, with many of the children playing a leadership role in the planting process. The pupils had been shaped by gardening’s lessons and its potential.

As the children returned to their classrooms after the final session of planting, Eco Drama’s director Emily Reid pulled me aside. She had seen how a boy had taken the initiative to claim responsibility for a sunflower he had planted during the transplanting of the set – even giving the flower its own name ‘Jack’. Emily saw the boy standing by one of the garden beds and started walking towards him, when she suddenly stopped, intrigued.

Lost in his own world and focused inward, the boy did not know that Emily had been close by. As the boy stood there, sharing a moment with his newly found friend ‘Jack’, he began to sing softly to the flower. In the context of Uprooted, where the characters sing to their plants on stage, this would not have been considered unusual; however, it had been a striking moment to experience in the real world. It was only a moment (perhaps only a few seconds before the boy joined his classmates), but Emily’s description of the event bought me incredible joy.

This boy had found a way to break through perceived binaries between humans and nature, nature and culture. He had connected to the ecological complexity of the living world with such simplicity. In this moment of more-than-human communication, this small boy had seen himself as an integral part of the web of life, as though it was the most natural thing in the world.

The post, The Boy and the Sunflower, appeared first on Ecoscenography.
———-

Ecoscenography.com has been instigated by designer Tanja Beer – a PhD candidate at the University of Melbourne, Australia, investigating the application of ecological design principles to theatre.

Tanja Beer is a researcher and practitioner in ecological design for performance and the creator of The Living Stage – an ecoscenographic work that combines stage design, permaculture and community engagement to create recyclable, biodegradable and edible performance spaces. Tanja has more than 15 years professional experience, including creating over 50 designs for a variety of theatre companies and festivals in Australia (Sydney Opera House, Melbourne International Arts Festival, Queensland Theatre Company, Melbourne Theatre Company, Arts Centre) and overseas (including projects in Vienna, London, Cardiff and Tokyo).

Since 2011, Tanja has been investigating sustainable practices in the theatre. International projects have included a 2011 Asialink Residency (Australia Council for the Arts) with the Tokyo Institute of Technology and a residency with the Royal Central School of Speech and Drama (London) funded by a Norman Macgeorge Scholarship from the University of Melbourne. In 2013, Tanja worked as “activist-in-residence” at Julie’s Bicycle (London), and featured her work at the 2013 World Stage Design Congress (Cardiff)

Tanja has a Masters in Stage Design (KUG, Austria), a Graduate Diploma in Performance Making (VCA, Australia) and is currently a PhD candidate at the University of Melbourne where she also teaches subjects in Design Research, Scenography and Climate Change. A passionate teacher and facilitator, Tanja has been invited as a guest lecturer and speaker at performing arts schools and events in Australia, Canada, the USA and UK. Her design work has been featured in The Age and The Guardian and can be viewed at www.tanjabeer.com