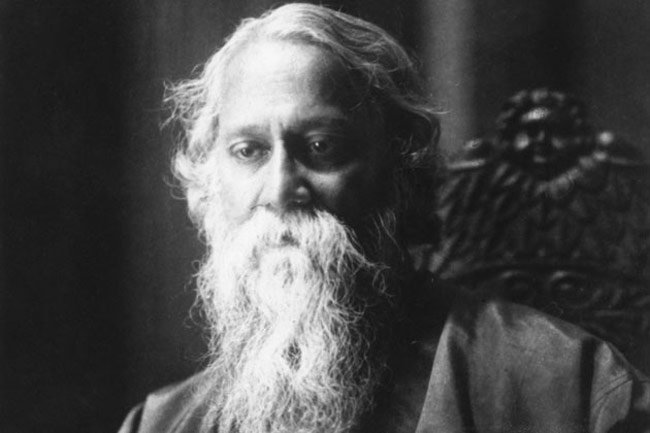 THE SOIL IN return for her service
keeps the tree tied to her,
the sky asks nothing and leaves it free.

Liz Adamson asked us to share that Professor Bashabi Fraser and Christine Kupfer are launching a new online journal called Gitanjali and Beyond, as part of their work at the Scottish  Centre of Tagore Studies.

Gitanjali and Beyond is a peer-reviewed open-access international journal, promoting creative writing and research on Rabindranath Tagore’s work and life, his circle and his impact. Tagore won the Noble Prize in literature (2013)

We are looking for short articles with photos/ videos of artworks (painting, sculpture, photography, installation, performance art, new media etc.) for our new open-access online journal Gitanjali and Beyond, which publishes peer-reviewed academic articles, creative writing and art. Our upcoming issue is “Expression and relevance of Rabindranath Tagore’s spirituality in the arts, education and politics.” The artwork submissions do not have to directly relate to Tagore but should relate to aspects of his thinking related to this topic.

Rabindranath Tagore’s spiritual ideas are this-worldly and at the same time based on the belief in a deeper reality. His ideas were inspired by Hindu scriptures such as the Upanishads, Vaisnava, Baul, Buddhist and Persian traditions, the reformist involvement of his family in the Brahmo Samaj, and his encounters with ideas and people from around the world. At the same time, he creatively selected and reframed these ideas on the basis of his own revelations. Spirituality, for Tagore, touches every aspect of life and leads humanity to fullness and joy by connecting them with other people, with nature, and with spirituality. This connection is established through love, action and knowledge. Tagore’s spirituality has many social and political facets, as it encourages active involvement to make the world a better place by developing internationalism/cosmopolitanism, tolerance, and social engagement.

It is relevant for ecology as it embraces the connection and care for nature. He expressed all these ideas through his poetry and prose, through his educational and social endeavours, and through his art. Tagore’s ideas have been described as an artists’ religion, as they encourage creative interactions with the world.

Further inspiration can be found in his essays (e.g., https://fortunedotcom.files.wordpress.com/2014/02/sadhana-by-tagore.pdf) and in his poetry  (http://www.tagoreweb.in/StaticTOC/AlphabeticEnglishVersesIndex.aspx?ct=Verses).

Decisions on publications will be made by the Art Editorial Board of Gitanjali and Beyond, based on the quality of the work.

Please send your submissions to c.kupfer@napier.ac.uk until 17 April 2016.