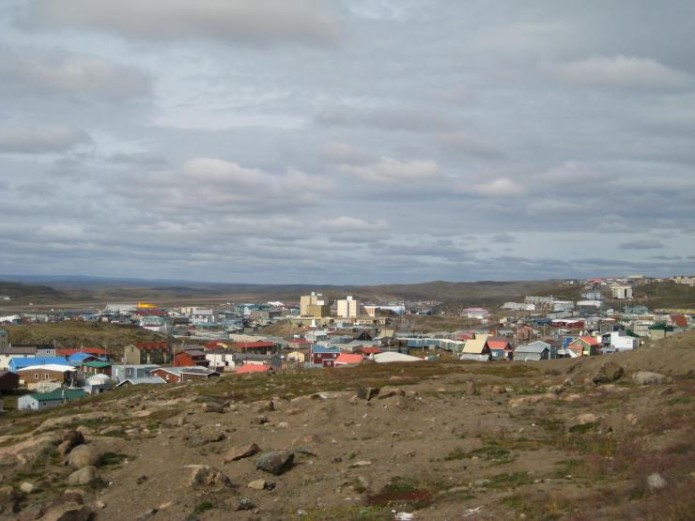 In Search of a New Aesthetic

This post originally appeared on Howlround, and is being posted under a under a Creative Commons Attribution 4.0 International License(CC BY 4.0). You can find the original post here: http://howlround.com/in-search-of-a-new-aesthetic

This week HowlRound is  exploring Theatre in the Age of Climate Change. How does our work reflect on, and respond to, the challenges brought on by a warming climate? How can we participate in the global conversation about what the future should look like, and do so in a way that is both inspiring and artistically rewarding?

It all began with a research trip to the Canadian Arctic. After being commissioned by Seema Sueko, then Artistic Director at Mo`olelo Performing Arts Company, to write a play about the intersection of race, class, and climate change, I found myself on a plane heading to Iqaluit in the territory of Nunavut to learn more about the Great North and its inhabitants.

My initial idea was to write about the opening of the Northwest Passage. With sea ice melting and the possibility of an Arctic shipping route opening soon, there was going to be significant impact on local Inuit communities. But after spending three weeks in Nunavut, after talking to scientists and government officials, Inuit activists and elders, environmentalists and tourists, after hiking the pass in Auyuittuq National Park and eating arctic char and caribou, I realized that my idea was too simplistic, and that to capture the complexity and magnitude of the drama unfolding at the top of our world, I needed to rethink how I wrote my plays.

It has become a cliché to say that climate change is the biggest challenge humanity has had to face. But it is nonetheless true that the scope of the problem is unprecedented. No part of our lives remains untouched. Our economies, infrastructures, political systems, environment, societies are all being affected. The impact of climate change is so profound that we now have a word to describe the geological epoch that is being shaped by it: theAnthropocene.

We will all be affected to different degrees, but no one will escape. And since greenhouse gases permeate the global atmosphere, there is no way to address the problem locally, without taking the entire system into account. This is particularly true in the Arctic where the Inuit population is being disproportionately affected by warming temperatures, yet produces very little carbon emissions. The Inuit cannot, on their own, protect their home because the forces threatening it are coming from places that are not under their jurisdiction. If they are to remain in the Arctic, where they have lived for millennia, they need the help of big emitters like the US and the rest of Canada. They also need to develop their economy, which translates into resource extraction. And they need to contend with a federal government that, given the new geopolitics in the Arctic, has huge stakes in maintaining a strong presence.

After spending three weeks in Nunavut, after talking to scientists and government officials, Inuit activists and elders, environmentalists and tourists, after hiking the pass in Auyuittuq National Park and eating arctic char and caribou, I realized that … to capture the complexity and magnitude of the drama unfolding at the top of our world, I needed to rethink how I wrote my plays.

Once I understood this situation, it became clear that writing a play using a traditional narrative structure didn’t make sense. I define “traditional narrative structure” as being a narrative driven by a central character whose journey gives us a perspective on a particular subject. It generally presents a dominant point-of-view, with secondary characters acting in support of, or in opposition to, that dominant view. In essence, it is to theatre what perspective is to visual arts. As John Berger describes in his book Ways of Seeing, “the convention of perspective … centers everything on the eye of the beholder. It is like a beam from a lighthouse—only instead of light traveling outwards, appearances travel in. … The visible world is arranged for the spectator as the universe was once thought to be arranged for God.”

The single narrative voice supports the assumption that reality can be described as the experience of a single observer, and everything else becomes subordinate to that observer. (It is, for the most part, how history is written.) But if there is one thing we are learning from climate change, and from the very etymology of the word “Anthropocene,” it is that positioning humans at the center of the universe has disastrous consequences for the planet, and is no longer viable. We need a new consciousness. We need a new aesthetic.

Good art has always been both a reflection of the world we live in, and an attempt to push society forward. The existentialist movement of the mid-twentieth century moved us beyond rationalist thinking and into the realm of individual sensory perceptions, with plays like Waiting for Godot capturing the angst of the post-war era. Later on, postmodernism introduced the concept of bottom-up thinking, empowering people to have a say in how their lives were shaped, and artists to break free from the idealized perfection of the modernist movement. In the theatre, this translated into textual innovations, multidisciplinary works and an emphasis on questioning rather than providing answers, as exemplified by the works of Caryl Churchill and Tom Stoppard. But now that the world is changing again, how are we reflecting that change and furthering the conversation?

It is possible to write plays—even good plays—about climate change using the traditional narrative structure. I have seen a few, and been both moved and inspired by them. But if we want to be active participants in shaping our future, we need to move beyond writing plays about climate change to writing plays thatare climate change—plays that embody, in form, content, and process, the essence of the issues we are facing. Plays where the concept of climate change is so integral to the work that the term doesn’t even need to be uttered. New problems cannot be solved with old solutions. A new consciousness requires new artistic constructs.

I returned from Baffin Island knowing I couldn’t tell any one part of the story I encountered without contextualizing it within the bigger whole. If I privileged one voice over the others, I would be cheating the people and place I wanted to honor, and inviting audiences to take sides. So instead, I created an ensemble of eight conflicting voices held together by a shared breath and a sense of place. And this became Sila—a play where everyone belongs and has a say, including animals and gods, but no one holds the definitive view; a play where every language is spoken, and every realm (here on earth, below and above) is represented; a sort of cubist story, guided by the concept of interconnectedness, where it is impossible to reduce the work to a single perspective.

And this was just the beginning of the journey. As I was writing Sila, I realized there was much more to explore than could be done in a single play so I expanded the project to eight plays—one for each country of the Arctic—and baptized it The Arctic Cycle. I also gave myself the challenge, for each play, to collaborate with an artist from a different discipline who lives in the country where the play is set. (Again, more than one voice.) For Sila, I worked with an Inuit spoken word poet. For Forward, the second play of the Cycle, I am collaborating with a Norwegian electropop singer/songwriter.

With Forward, I built on the idea of multiple voices and created a structure that spans over a hundred years, and includes close to forty characters. Forwardpresents a poetic history of climate change in Norway from the initial passion that drove explorer Fridtjof Nansen to the North Pole, to the consequences of over a century of fossil fuel addiction. Woven through this history is the passionate love affair between Nansen and Ice (Ice appears as a character in the play). While in Sila, the breath was shared across the land, in Forward, it is shared through time with one exhale becoming the next generation’s inhale. Interconnectedness again, but vertical rather than lateral.

I don’t know where this will lead but I know I have my finger on the pulse of a brand new movement. We often talk about the cultural shift needed to embrace climate change and address it efficiently. But the shift is already happening. We are in it. Over the last several years, I have observed certain trends, both in the theatre and in the art world at large, that point to a new climate change aesthetic:

No one can define a movement on her own. But I am passionate about the search—that’s why I have put together this series on Theatre in the Age of Climate Change. I want to hear from other artists who are struggling with similar questions. How do we do it? Why do we do it? Why does it matter? And I want to share what I learn with all of you, my theatre colleagues.

Throughout the course of the week, you will hear from writers, directors, designers, composers, performance artists, and artist supporters from the US, Canada, Australia, and Norway. You will hear about sustainability, of course, and activism, but also about grief and hope and the burning desire to make a change. The artistic strategies are as varied as the artists themselves but holding them together is the breath, that almost imperceptible manifestation of life that keeps us bound to each other and the planet, that intimate sharing of air molecules that contains both the beauty and mystery of our existence.

If we can remember this fundamental truth and use it as the underpinning of the new climate change aesthetic, we are well on our way to shaping a culture that has the tools to deal with the challenges it has inadvertently created for itself.