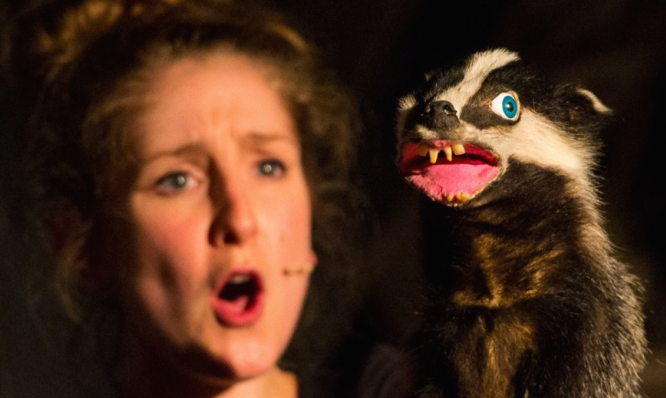 Although we initially planned to have fewer finalists for the 2015 Fringe Sustainable Practice Award, this year’s shortlist provided a great wealth of interesting and deserving productions, and the assessment process proved particularly difficult. As a result, there were five productions selected as finalists from our shortlist of 21 Edinburgh Festival Fringe shows, from which an overall winner was selected.

Here, we give a summary of our four excellent finalists, and the range of approaches they took when showcasing sustainability on the Fringe.

This one-woman show addresses the confines of our urban-office environment and the desire to reconnect with more natural surrounds. Themes of health and wellbeing were brought to the fore with the examination of the loneliness of many current modern day lifestyles, and the inherent desire of humans to reconnect with nature. The assessors found the show extremely observant, and were particularly impressed by the development of the set throughout the production, which appeared to grow in greenery and ‘bloom’ towards the climax of the show. In this way, Garden demonstrated the role of the on-stage environment in reflecting our own physical surrounds, and the impact of thoughtful stage design.

Scarfed for Life by the Citizen’s Theatre

Scarfed for Life did not self-identify as a show containing sustainability themes, and the Citizen’s Theatre production was shortlisted on the strength of its efforts to reduce the environmental impact of the stage design. 4 sound cues, 7 chairs (sourced from the venue) and a baseball cap were the only set and props required for the production centred around the comedy and repercussions of the first old-firm match of the season. However, upon review assessment, the team found the show to be a fantastic example of a production examining social sustainability issues of embedded sectarianism and domestic violence in an honest, approachable and accurate manner, whilst maintaining a high quality and entertaining show!

Sing for Your Life by The Vaults

Although unusual in its ‘musical taxidermy’ format, Sing for Your Life used comedy and gore to confront their audience with thoughtful prompts on a wide range of animal-related sustainability issues, whilst also considering similar elements in their own design. Badger culling and a loss of countryside biodiversity, farmed animal antibiotic use, invasive species, pedigree dog breeding and the fur debate were all considered in song by puppets crafted from the animals they addressed (themselves sourced as road-kill or previous taxidermied specimens). The assessors were impressed at the skill of the production, and the quality of the communication of complex, multifaceted ideas related to sustainability, with an individual approach to sustainable props.

Last year’s winner of the Fringe Sustainable Practice Award returned to the festival this year with fresh ideas. The assessment team again thought that the Handlebards displayed a high quality and unique demonstration of a first class touring production, with a twist take on Shakespeare. Travelling over 2000 miles by bike, performing across the UK on the approach to the Fringe, The Handlebards went a step further this year by actively engaging their audience in their own sustainable behaviour: getting them to cycle 5 miles across the city to a secret location for the performance. With support from Sustrans, and Edinburgh-based Spokes cycling organisation, the production ensured all left the show having already participated in more-environmentally friendly behaviour, and experienced more of Edinburgh’s natural surrounds and sustainable transport network. Peculius again demonstrated that it is possible to put on an incredibly sustainable show with Elizabethan content.