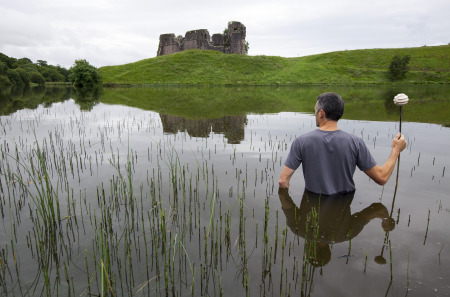 The creative team at EAFS needed help this year and ecoartscotland provided some editorial support for the newspaper and an essay on art and ecology as voluntary contributions.  EAFS is an incredibly important development in Scotland (as was the UNFIX festival this year, also delivered by voluntary effort).  The essay below attempts to highlight some of the different ways of working that characterise ‘art and ecology’ practices.

Art and Ecology or “the context is half the work”

By Chris Fremantle with input from Ann T Rosenthal.

Landscape painting represents or idealizes ‘nature,’ usually by depicting wide vistas, such as seascapes, forests, and countrysides. Sometimes it also brings attention to the human impact on the land, such as wilderness vs. settlement. Given the environmental challenges we face today, however, environmental art goes beyond representation or even witnessing changes in the land to effect social change through raising awareness and/or actually restoring damaged landscapes. Some of the ways environmental art differs from more traditional art forms, like landscape painting, are discussed below.

Considering art made or in progress by artists who work with environments or ecosystems, there are a few key things to consider, such as whether the project is reflective, awareness-raising or interventionist. You’ll find various things called ecoartxxx but, unlike Young British Artists, such as Damien Hirst, this isn’t about individualism or celebrities.

So, what are some of the things that might characterise artists working with ecologies?

Context – this might be ‘place’ or ‘issue’, though in the interesting projects these are deeply bound together. The issue might be the deep experience of a place and its effect on a person. Personally I find Hamish Fulton’s piece NO TALKING: seven days walking in the Cairngorms (1988) to be a very personal provocation – could I not talk for seven days? The issue might be storm surges and their impact on coastlines. Eve Mosher was featured in The New Yorker because she had marked a high water line on parts of New York (2007). When Hurricane Sandy hit New York in 2012 the debris marked the same line. Everyone was amazed that an artist had predicted the impact of an extreme weather event. The context might be a remnant of the ancient Caledonian Forest. The Collins and Goto Studio have been working in the Blackwood of Rannoch (2012-ongoing) to imagine a future of eco-cultural well-being where the forest’s beauty and biodiversity become an icon for a different Scottish landscape.

Interdisciplinarity is often another central characteristic. Artists are using methods and processes that are selected based on the idea/issue/context rather than the skill they were taught at art school. Don’t get me wrong, if you ask the right questions you’ll find that what the artists learnt at art school is still fundamental to their practice. But whether in deep durational collaborations or in short interactions, artists working with environments and ecologies learn and use the knowledge and practices of natural and social sciences, read and seek to influence policy, work in teams and maintain relationships. The quality of interdisciplinarity is perhaps in the seemlessness of what results, such as with Cinema Sark in EAFS 2013 where Pete Smith, Professor of Soil and Plant Science, and John Wallace, film-maker, explored the ecosystem of the river Sark in a work that was at once excellent science and compelling film.

Education and volunteering is a common characteristic of those projects focused on awareness-raising and intervention. It is important to understand that this aspect of practice is not separate from the process of making the art, not ‘outreach’ once the art has been made – rather it must be understood to be intrinsic.

Novelty is less important than sharing. Iterating and the commons are recurrent themes. All of the characteristics noted above (context/issue, interdisciplinarity and education and volunteering) militate against that particular art world requirement for constant newness. In the art world too often the focus is on new things, whereas ecoart is more often about new understandings and revealing experiences of the world around us (and our place or impact within it). More specifically documentation of environmental and ecological projects often takes the form of action guides, sets of instructions, or toolkits. We can recognise the aesthetic of artists, but when groups in Miami (2013) and Bristol (2014) did versions of Eve Mosher’s High Water Line, it wasn’t a breach of copyright – in fact she celebrates it. They used the Action Guide produced by Mosher working with ecoartspace.

Leaving the world a better place than you found it might be an overarching concern. This is more radical that it might sound when you consider that the archetype of the ‘reckless, hedonistic and art for arts sake artist’ has been pervasive for the last century anyway. John Thackara suggested that we live between on the one hand the despair at the scale of the crisis and the complexity of the challenges, and on the other hand the hope in the multitude of examples of grassroots activism, but he also commented that ‘don’t be evil’ is not enough. We have to act in ways to leave things better than we find them as we move through the world.