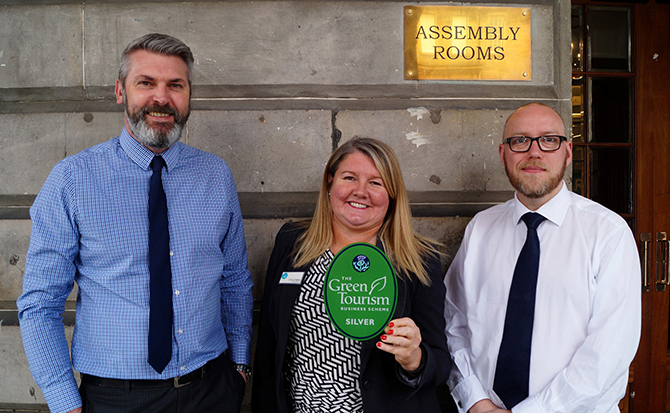 The Assembly Rooms in Edinburgh have been given a Silver Award by the Green Tourism Business Scheme, a programme that aims to develop and recognise exemplary sustainability initiatives within the hospitality sector. The award marks the success of the programmes and strategies implemented by the Assembly Rooms’ ‘Green Team’ to increase environmental awareness and positive action within this historic venue. A number of initiatives have been administered by the Assembly Rooms’ team, including a highly successful recycling programme (with effective custom signage), the introduction of bioplastics into biodegradable plastic cups and ongoing coordination with ethical suppliers.

The Assembly Rooms is a Green Arts Initiative member and has worked jointly with Creative Carbon Scotland on carbon monitoring projects within the City of Edinburgh Council Culture and Sport division. As a regular Edinburgh Festival Fringe venue, the Assembly Rooms sets a high standard for green operations during the busy summer festival period. Through their genuine commitment, the venue continues to showcase the finest international acts while pioneering techniques for approaching sustainability effectively at various levels of engagement.