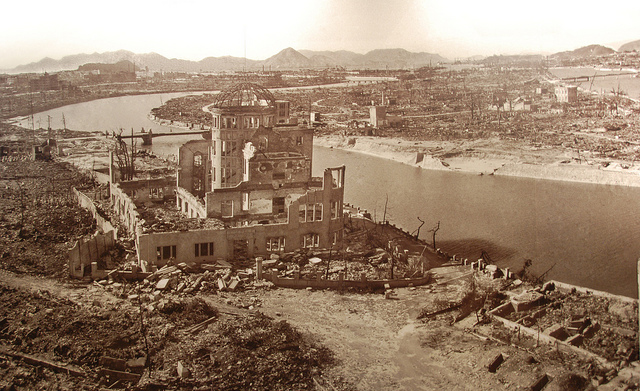 In charting 1945 to the present day context, and specifically the development of nuclear weaponry, one must consider the events of the past century as one of the most major human forays into irreversible environmental destruction. “A Century on the Edge: From Cold War to Hot World, 1945-2045” explored whether subsequent Cold War nuclear lessons have really affected our outlook, and if we can learn to live within our worldwide limit.

With a background in the biological and environmental sciences, but a later career in international security, Rogers was able to blend environmental and social sustainability concerns in a global warfare context. He propositioned that climatic change and the marginalisation of certain groups is the new form of insecurity that must be addressed by governments and agencies that might previously have focused on traditional weaponry as a primary fear.

The talk, chaired by Dr Andrea Birdsall from the University of Edinburgh and hosted at The Hub, also managed to explore and provide proof of how international cooperation had mitigated environmental threats in the past. The audience was reminded of the confirmed erosive impact of CFCs to the Ozone layer, and the successful international agreements that led to the global eradication of CFC production and the continuing recovery of the ozone hole in the Antarctic.

Rogers also drew from personal experience to demonstrate his first-hand experiences of climate change and his motivations for pursuing the topic. Although whilst joking that it would be all the audience members took from the talk, he evidenced his personal experience growing grapes and producing wine in England, enabled by obvious climatic changes that have taken place within his lifespan.

The 45-minute talk was also followed by 25 minutes of unexhausted questions from the varied audience. However, the breadth of audience query itself reflected the huge amount of material encapsulated within the topic, with further depth requested on food security, population pressure, the impact of religion and personal culpability. At several points, Rogers even suggested that whole evenings could be dedicated to discussing such topics in the context of security – demonstrating that the framing of sustainability dilemmas as ‘threats’ might provide more urgent engagement and ultimately solutions.

“A Century on the Edge: From Cold War to Hot World, 1945-2045″ was a one-off discussion event that took place on 27 August 2014. The event was part of the 2014 Edinburgh International Festival programme.

The post #GreenFests: Highlights from A Century on the Edge: From Cold War to Hot World, 1945-2045 appeared first on Creative Carbon Scotland.