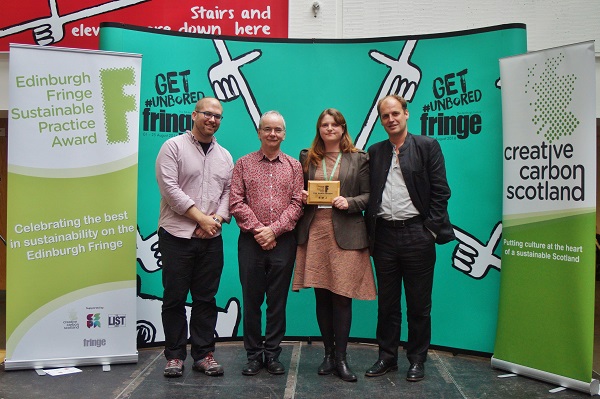 The Center for Sustainable Practice in the Arts and Creative Carbon Scotland, in partnership with the List, presented the Award at Fringe Central on August 22nd. 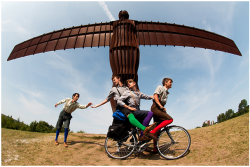 The 2014 Award for Sustainable Practice at the Edinburgh Festival Fringe was awarded today to the Handlebards for their production of The Comedy of Errors performed at the Royal Botanic Garden Edinburgh. In a ceremony at Fringe Central on Friday, August 22nd at 4:00 pm, after presentations by Brendan Miles from The List and CSPA Director Ian Garrett, Anthony Alderson, Director of Pleasance Theatre, presented Elinor Gallant, Public Programmes Manager at the Royal Botanic Garden Edinburgh, with the 2014 Award for Sustainable Production at the Edinburgh Festival Fringe on behalf of The Handlebards.

The Handlebards were selected due to their exemplary touring efforts, sustainable set design, and high quality performance. The Handlebards are a four-man, cycle powered, touring Shakespeare company cycling over 2000 miles to perform in almost 50 venues across the United Kingdom this summer whose “set and props used in the productions are restricted only to items that could be found either on a bicycle or in a campsite, with the team’s bikes rigged up to power various mechanical contraptions onstage. The use of bicycles as transport for the escapade will also save 45.6 tonnes of CO2 emissions, as compared to the same adventure undertaken by car.” 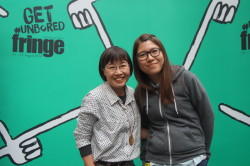 Ching-man Lo and associate whose production “My Luxurious 50 sq Foot Life” was a finalist for the award.

The Fringe Sustainable Practice Award is an annual celebration of performance that is working for an environmentally sustainable world. Open to all Fringe Festival productions by application, the award assesses all aspects of a production’s sustainability, from design to content. This award ceremony recognizes the best in this year’s sustainable productions, alongside inspiring presentations from Creative Carbon Scotland, the Center for Sustainable Practice in the Arts, and The List. The Sustainable Production Award is presented this year in partnership with The List, which is reviewing all shortlist shows and promoting the awards events.

The award is determined by the submission of a questionnaire about how the show was produced, and how environmental and sustainable themes were considered along the way. Assessors selected a short list of 21 productions, which appeared in the July 30th edition of The List. These 21 shows were reviewed based on their questionnaires and the assessment team voted for the production which most aligned with the priorities of the award. Four finalists – India Street, My Luxurious 50 sq. ft. Life, The Worm, and The Handlebards: A Comedy of Errors – were identified as outstanding entries before the winner was selected.

“Even more than we want someone to score perfectly on the questionnaire we use to evaluate shows, we want theater artists to look at the questions and think about how it helps to guide their thinking about sustainability in the their art. There may be questions asked in ways they hadn’t thought, and we hope they ask these questions of their next project and the project after that.” adds CSPA Director Ian Garrett. 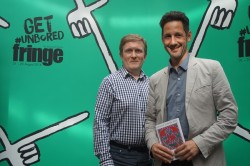 Ian Garrett and Miranda Wright founded the CSPA in early 2008. The organization provides a network of resources to arts organizations, which enables them to be ecologically and economically sustainable while maintaining artistic excellence. Past and Present partnerships have included the University of Oregon, Ashden Directory, Arcola Theatre, Diverseworks Artspace, Indy Convergence, York University, LA Stage Alliance and others.

Center for Sustainable Practice in the Arts: http://www.sustainablepractice.org