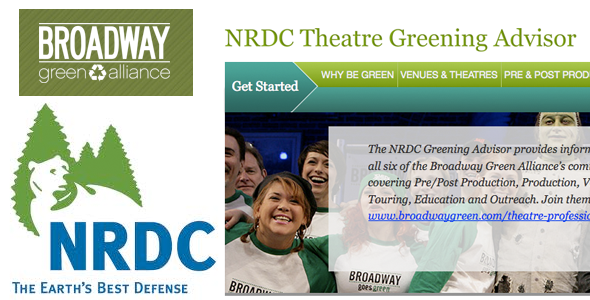 In 2009, New York Mayor Michael Bloomberg announced that “Broadway was turning green”. Now the Natural Resources Defense Council has teamed up with the Broadway Green Alliance and created the ‘NRDC Theatre Greening Advisor’ – a guide to help theatres across the country implement similar eco-intelligent practices as the Broadway theatres successfully have been implementing. 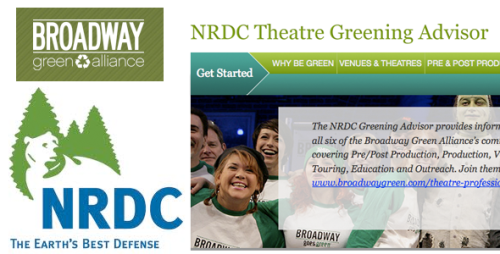 “If you had the pleasure of taking in a Broadway performance in the past five years, you also witnessed sustainability taking center stage,” wrote Brandon Baker in Ecowatch as the Broadway Green Alliance celebrated five years of greening productions in January 2014.

They used the occation to launch an initiative to bring sustainable practices to theaters across the country. In collaboration with the Natural Resources Defense Council, the alliance says its new online Theatre Greening Advisor is the most comprehensive theater greening information database available.

The Greening Advisor provides resources allowing theaters to embrace sustainability at all times.

Greener lighting
The alliance also launched the BGA Greener Lighting Guide, in partnership with the Professional Lighting and Sound Association. This online tool will help designers and technicians alike make greener choices in lighting instruments from some of the biggest brands.

The Broadway Green Alliance helped bring energy efficient lighting throughout the Great White Way and now hopes to do the same at theaters all over the nation.

“Theatre and the environment are inextricably linked. Without clean air, clean water and a healthy climate, our enjoyment of most productions–indoor or outdoor–would not be possible. In fact, nature is the ultimate source of all economic value. No commerce or culture is possible without clean air and water; fertile topsoil; a chemically stable atmosphere; raw materials for food, energy and medicine; or the natural processing of waste by the millions of species inhabiting our soil, water and air.”

From Broadway to the rest of the U.S.
The organisations want to provide environmentally preferable options to producers, theater owners, designers, managers and design shops in the same way that the Broadway Green Alliance brought them to Broadway in New York City.

Here are some of the green achievements made to date on Broadway:

• Broadway theaters have replaced all their marquee and outside lighting with more than 10,000 energy-efficient bulbs, saving about 700 tons of carbon emissions per year.

• Over the last five years, the Broadway Green Alliance has collected over 15 tons or 31,000 pounds of e-waste and nearly 10,000 pounds of textiles.

Each of the sections in this menu bar, starting with “Why Be Green”, includes a variety of subsections that appear in the lower turquoise menu bar. Use your cursor to explore the dropdown menus of content available for these subsections and click items to open pages on the different topics to learn more.

Ecowatch – 28 January 2014:
Broadway Expands Its Green Practices to Theaters Across the U.S.

Affecting the thinking and behaviour of people and communities is about the dissemination of stories which will profoundly impact cultural values, beliefs and thereby actions. The stories can open people’s eyes to a way of thinking that has not been considered before, challenge a preconceived notion of the past, or a vision of the future that had not been envisioned as possible. As a sector which is viewed as imbued with creativity and cultural values, rather than purely financial motivations, the cultural sector’s stories maintain the trust of people and society.