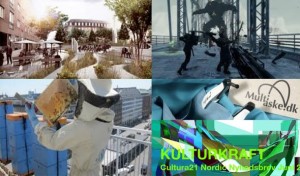 In the coming year, Cultura21 Nordic will be working with partners to bring pioneering agents from the Baltic Sea Region together and create a ‘flagship project’ on the issue of culture and sustainability: ‘Baltic Sea Region cooperation with a focus on culture as a part of sustainable development’.

In April 2013, Cultura 21 Nordic and Innogate launched a 16-page report titled ‘Culture and Sustainable Development in the Baltic Sea Region – 8 findings, a number of opportunities and a way forward…’.

The Baltic Sea Region is very rich in networks and cooperation efforts – many of which build on and impact on culture and sustainable development. The mapping and findings reported aim to identify current actors, networks and existing relevant cooperation activities that address specific areas related to culture and sustainability in the Baltic Sea Region.

Commissioned by the Nordic Council of Ministers and based on research interviews with, among many others, cultural institutions such as the Danish Cultural Institute, the Swedish Institute, Intercult, and Heinrich Böll Stiftung, the report is meant to serve as as a point of departure for discussions which, when duly digested, will lead to concrete and feasible activities designed to enable culture to impact more strongly on sustainable development in the Baltic Sea Region.

The report also points at key areas of interest for further cooperation. Perhaps not surprisingly the first finding in the year-long process was that the sphere of cultural collaboration and sustainability is complex, or rather: that there are a number of spheres. Thus the overview presented in the report, according to the authors, is “more of a snapshot than a full picture.”

Summing up, and looking through their findings, the authors conclude it is apparent that the largest obstacle for enabling culture to impact on sustainable development in the Baltic Sea Region seems to be a lack of knowledge about culture-driven practises, tools and cooperation approaches for sustainable development:

“There are many actors that in different ways make an effort to impact on sustainable development through culture(s). However, their efforts remain fragmented – and knowledge of good (and bad) practices are not effectively collected and communicated. There is a need to link efforts more effectively through dialogue and cooperation, to facilitate exchanges of experience and mutual learning. There is also a need to assess current efforts if the key drivers for enabling culture to impact on sustainable development are to be better understood.”

And if so, the authors ask, should such a hub have one location or rather be made up of a number of competence nodes – say “Culture and Sustainability Smart Labs” at different locations around the Baltic Sea – linked through the main hub?

“The advantage of multiple decentralised competence nodes/labs could be that it would allow local actors to tap more easily into the knowledge resources available in their region and, and through the link to the main hub across the Baltic Sea Region. Both the main competence hub and decentralised labs/nodes could be hosted by existing organisations.”

In his presentation at the conference ‘Culture and Collaboration in the South East Baltic Region’ in Kaliningrad in June 2013, director Oleg Kofoed started out with asking the basic question: “How can culture lead transformations?”Oleg Kofoed’s 15-slide presentation can been seen onslideshare.net

The report suggests an answer this question — how culture can lead transformations. For instance, it states that:

“Culture is of great importance to economically, socially and environmentally sustainable development. Culture is important not least because culture is a bond that brings people of a community (town, city, country or region) together and because it provides a framework that shapes people’s standards and behaviour. In so doing, culture impacts in multiple ways on development in most areas of society. For example culture impacts significantly on business opportunities, job creation, integration, health, education, technologies, and creativity – and in so doing culture impacts on sustainable development. This overall role of culture seems to be generally accepted, in particular – and not surprisingly – among stakeholders in the cultural sector/sphere but also increasingly so also across sectors/spheres.”

The report mentions that at recent COP meetings, cultural aspects of sustainability have grown in importance:

“In 2010 the UNESCO partner United Cities and Local Governments declared culture “The Fourth Pillar of Sustainability”. This was followed in 2012 by the Rio+20 UN conference, which declared: “We acknowledge the diversity of the world and recognize that all cultures and civilisations contribute to the enrichment of humankind and the protection of the Earth’s life support system. We emphasize the importance of culture for sustainable development. We call for a holistic approach to sustainable development which will guide humanity to live in harmony with nature.”

The logic is that by including culture in sustainability one achieves a more complete development model which – it is argued – better embraces the complexity of societies and highlights the importance of culture as a driver of societal change and development.” (…)

“The recently updated Action Plan for the EU Strategy for the Baltic Sea Region does emphasise the importance of culture to sustainable development, as part of a dedicated Priority Area for Culture and associated cooperation activities. The Nordic Council of Ministers is committed to taking responsibility for advancing regional cooperation under the Priority Area for Culture – including by leading the Flagship Project ‘Baltic Sea Region cooperation with a focus on culture as a part of sustainable development’.

This paper is a first effort under this flagship project. It is an attempt to map stakeholders and activities in the field of culture and sustainability. It is also a first effort to engage stakeholders in a new region-wide dialogue aiming at identifying opportunities for synergies in current efforts, and to propose practical steps for further cooperation in the field of culture and sustainability. The longer-term objective of the Nordic Council of Ministers is to take the first steps – along with partners from around the Baltic Sea – towards systematically developing knowledge and capacities in the Baltic Sea Region on ways in which culture contributes, and can contribute more, to sustainable development – whether be it economically, socially and/or environmentally sustainable development.”