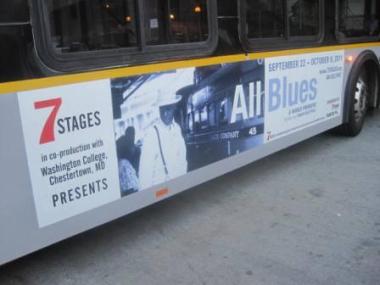 Per its mission statement, Atlanta’s 7 Stages Theatre devotes itself to “engaging artists and audiences by focusing on the social, political and spiritual values of contemporary culture.” One such value—environmentalism—has yielded a clever campaign that simultaneously promotes the theatre and sustainability.

…marketing director Charles Swint says the theatre asked itself, “What are some creative ways we can promote our shows without spending a lot of money?” Piggybacking off the green kick, 7 Stages partnered with the Metropolitan Atlanta Rapid Transit Authority (MARTA) in a campaign where, in return for select buses featuring theatre advertising, 7 Stages will encourage its audience to use environmentally-conscious modes of transportation, like MARTA. “Our staff carpools, bikes and takes MARTA to the office and around town,” says Swint. “We want to encourage our patrons to do the same.” The deal is sweetened by a $5 discount offered to MARTA Breeze Card–holders.