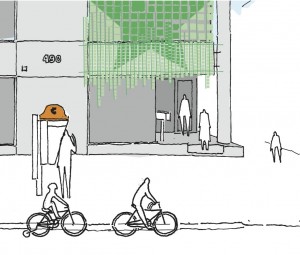 The 1200 Buildings Commission is a pilot public art project responding to the energy and sustainability performance of a commercial building within the City of Melbourne – the Green Spaces at 490 Spencer Street in West Melbourne. The Green Spaces building is an early entrant in the City’s 1200 Buildings scheme, which aims to facilitate the energy retrofit of 1200 buildings within the municipality, making a significant contribution towards meeting the City of Melbourne’s target of carbon neutrality by 2020.

Carbon Arts is working closely with the City of Melbourne, Guy Wilson of Fort Knox Self Storage and Dave Collins of The Green Spaces to deliver a $30,000 commission by the end of 2011. Eleven artists, designers and architects have been selected to provide proposals for the space and share in the development of a new public arts program. The public arts program aims to leverage the efforts of signatories to the 1200 Buildings scheme by making these largely invisible efforts visible to the public and engaging all Melbournians in the Eco-City vision.