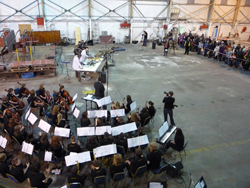 Margaret Mc Laughlin, fine artist, has attended and written about an innovative sound work that was performed in Mooney’s boatyard, Killybegs, Co. Donegal, Ireland, on the 16th of October 2010. The work was part of the Donegal County Council’s Lovely Weather Art and Climate Change Public Art Programme (2009-10) . The project was co-curated by the Regional Culture Centre’s John Cunningham and Leonardo’s Annick Bureaud.  The sound performance pieces were based around the topic of ‘dead zones’, which are areas in the ocean in which aquatic life has been dramatically reduced. Artists Sean Taylor and Micheal Fernstrom, the Softday partnership, have extensively researched this subject.  As part of Leonardo/OLATS and Donegal Co. Council Lovely Weather Artist’s Residency, ‘Softday’ interpreted the sound of ‘dead zones’ into a tangible form for local audiences in a variety of sound forms.  Disturbingly there are 20 contested deadzones around Ireland, two of which are in Donegal bay and Killybegs harbour. The number of dead zones are increasing worldwide.

The activities of Cultura21 at the international level are coordinated by a team representing the different Cultura21 organizations worldwide, and currently constituted of:
– Sacha Kagan (based in Lüneburg, Germany) and Rana Öztürk (based in Berlin, Germany)
– Oleg Koefoed and Kajsa Paludan (both based in Copenhagen, Denmark)
– Hans Dieleman (based in Mexico-City, Mexico)
– Francesca Cozzolino and David Knaute (both based in Paris, France)