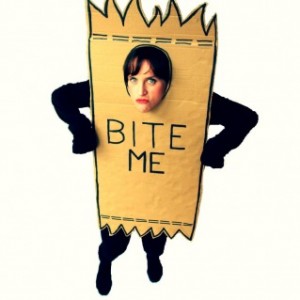 The Center for Sustainable Practice in the Arts (CSPA) has awarded the first CSPA Fringe Award for Sustainable Production at the Edinburgh Fringe to The Pantry Shelf, a comedy produced by Team M & M at the Sweet Grassmarket venue. The award, which debuted earlier this year at the inaugural Hollywood Fringe Festival , was designed to reward sustainable practice in the production of a fringe performance, in addition to content that encourages audiences to incorporate sustainable changes into their own lives

The Pantry Shelf is a satirical comedy that takes place in any ordinary pantry shelf. Characters are food items most of us have readily available. The story follows the addition of a revolutionary new snack to the shelf: Queenie, a quinoa, date and bark bar.  Queenie discovers that her healthy branding doesn’t accurately represent what’s actually inside. The comedy explores branding, consumerism and the corporate control of our diets. It’s also a “love story between a quinoa bar, a bag of Scottish porridge and a sexy block of dark chocolate,” about staying true to yourself.

“We chose The Pantry Shelf as the award winner based on its comprehensiveness,” comments Ian Garrett, Executive Director of the CSPA.  “The show raised valid questions that are relevant to everyone’s daily lives, without being heavy handed. Team M&M took great care to ensure the production was produced as environmentally sustainable as possible, and the content of the play was both entertaining and informative.”

The CSPA Directors, Ian Garrett and Miranda Wright adjudicated the award, along with select CSPA affiliates. The recipient was chosen based on their submission of a questionnaire about how the show was produced along with audience response. For the Edinburgh Fringe, Mhora Samuel and Tim Atkinson from The Theatres Trust’s European Regional Development Fund-backed Ecovenue project have helped the CSPA adapt the criteria for a UK audience, providing guidance on UK equivalents to US name brands, as well as providing insight on measuring conventions and policy. The award simply would not have been complete with out their assistance.

In addition to offering an award for Fringe performances, the CSPA also presented a panel on sustainability in theater at Fringe Central in Edinburgh on Monday Morning, August the 16th. Panelists included Garrett and Wright, Sam Goldblatt (author of Greener Meetings and Events), Dr. Wallace Heim of the Ashden Directory, Mhora Samuel of theTheatres Trust, and Bryan Raven of White Light. A full video of the session can be found on the CSPA website and at http://cspa.blip.tv.

Wright continues: “We’ve been working since we started the CSPA on how to provide resources and guidelines for sustainable production to the theatrical community. Both Ian and myself come from theatrical backgrounds and it is important to us. The fringe festival model provides an ideal platform to introduce these ideas and the award due to the expectations and scale of the shows. It is easier to start the conversation at a fringe level of production than Broadway. By involving ourselves with the Edinburgh Fringe, the largest and oldest fringe in the world, we are looking to create the greatest visibility and excitement around the introduction of ideas of sustainability to the largest number of theater artists at home and away.”

“Even more so than we want someone to score perfectly on the questionnaire we use to evaluate shows, we want theater artists to look at the questions and think about how it helps to guide their thinking about sustainability in the their art. There may be questions asked in ways they hadn’t thought, and we hope they ask these questions of their next project and the project after that,” adds Garrett.

Ian Garrett and Miranda Wright founded the CSPA in early 2008 after individually working on each of the programs that now make up the multi-faceted approach to sustainability separately. The organization provides a network of resources to arts organizations, which enables them to be ecologically and economically sustainable while maintaining artistic excellence. Past and Present partnerships have included the University of Oregon, Ashden Directory, Arcola Theater, Diverseworks Artspace, Indy Convergence, York University, LA Stage Alliance and others. www.sustainablepractice.org