Below is the recently-produced clip for the Reality Campaign, which is working to dispel the myth of “clean coal.” It’s directed by the Coen brothers. It’s funny. And it works in consumer metaphors and symbols. Smiles below. Props to treehugger.

The exhibition of new British and Australian-made films Figuring Landscapes is currently touring the UK. In this age of crisis, film writer David Berridge looks for evidence of whether artists are changing the way they depict the natural world.
Go to RSA Arts & Ecology Features

What if?… James Lovelock and the five in six

This week James Lovelock was in conversation with the journalist and writer Tim Radford in front of a packed audience at the RSA. His latest book The Vanishing Face of Gaia is currently 22 on Amazon – a remarkable achievement for a book which is not exactly a laugh a page.

In fact both James and Tim were full of humour at the RSA event, so it’s a moment before some of the facts sink in. People next to me suck in their breath at Jim’s prediction of one billion people on earth by the end of the century. We are around six billion at the moment. I join the breath suckers. Five in six of us. I’m pretty sure I heard him say that India will pretty much be gone entirely. If he’s right.

Today a headline in The Guardian reads “Obama pulls back on early climate change legislation”. I see this just as I’m trying to write a positive statement for the Business Council for Sustainable Development, ten years focusing on the practical implementation of sustainable development values. There’s so much progress that has been made and now is the time to build on that, rather than gloom up on the worst case scenario. But nor should we forget it. Just as apathy had terrible consequences for so many in the Second World War, so could complacency in the face of this century’s challenges.

Note to self, get on WattzOn.com and see how you’re shaping up Crimmin before tub thumping any further.

Cypress College Gallery Director and artist Paul Paiement states, “the show has been well attended with repeat visitors who actually spend time looking at and asking questions about the installations.” Don’t we love that! In the twenty days the show has been open to the public (those are gallery days open), they estimate that 1,500 visitors have come to see the show (and this is a 2,500 square foot gallery located 30 miles south of downtown LA). We are very please with responses by faculty and administrators who are impressed that the work is not all object based, that there is an architect and landscape designer included, and that the artists are seeking to convey messages and get people to think about the world beyond the art itself.

Many hours have been spent updating the blog for ecoLOGIC during the show with information on related lectures/panels/exhibitions/links and we would like to direct our ecoartspace blog followers to check it out at http://ecologicla.blogspot.com.

If your in Los Angeles this weekend, this is your last chance to see the show.
Go to EcoArtSpace 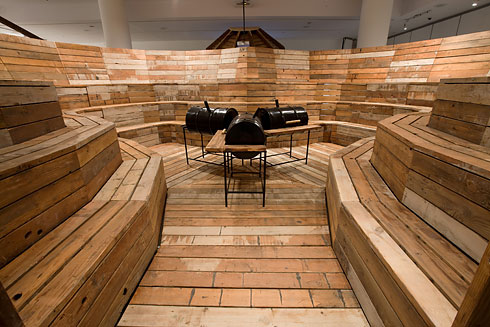 On Friday, I had the opportunity to check out Tokyo-based Atelier Bow-Wow’s installation at REDCAT. Made of recycled wood, the exhibition consists of three contraptions based on the famous Case Study Houses. It includes The BBQ House, (above), a Hammock House, and a Sunset House.

Part light and space (like Turrell, Eliasson or R. Irwin), part relational aesthetics and also an architectural experiment, these pieces are big, fun and worth seeing in person. Here’s hoping that they end up in a park or some other public space after the exhibition ends on March 29.

Welcome to The Age of Stupid

{Evidence of land subsidence in California’s San Joaquin Valley from 1925-1977. From the USGS}

The picture above tells the story of about 30 feet. That’s how much the ground has subsided in parts of the San Joaquin Valley (at least through 1977) because of water withdrawls and the resulting soil consolidation.

Recently, the LA Times reported that the ongoing drought in California might result in no agricultural water being delivered to more than 200 water districts in California.

I’m no expert on California water policy so I’m going to keep my comments brief. But to me, a system where we are growing cotton and rice with irrigated water doesn’t make much sense. Here’s hoping some smart people some where will figure this out, because I know artists are going to be limited to doing things like reposting ominous photos (see above) of what is going on.
Go to Eco Art Blog 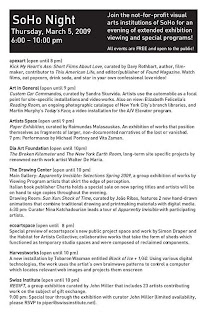 On Thursday March 5th ecoartspace will join with several other NYC non-profit art spaces for Soho Night. There will be special events, exhibitions and programs from 6 – 10 pm. (see list) For this event ecoartspace will stay open until 8pm so please visit us on the early side.

The public opening for the new ecoartspace NYC project room at 53 Mercer Street in Soho will be on Saturday March 7th from 12 -6pm.

The first ecoartspace project at Mercer St will be Simon Draper’s work with the Habitat for Artists Collective which began in Summer 08 in Beacon, NY. In that original Habitat for Artists project Simon Draper supplied each artist with a basic shed (6 x 6′ with doors, window and skylight). These collaborative works take the form of sheds, that literally functioned as temporary studio spaces and came outfitted with doors, windows and skylight. The materials used in the creation of the structures consists of reclaimed components and each artist in the collective creatively adapted their shed to suit their own needs. (read more details in the November 13th blog post on the HFA project).

ecoartspace has been operating bi-coastally, with Amy Lipton in New York and Patricia Watts in the San Francisco bay area. We are celebrating our 10th anniversary this year and due to a growing presence and increased demand for ecoartspace’s unique brand of environmentalism, the time has come to open an office in New York City.

ecoartspace is part of a growing community of artists, designers, scientists, curators, writers, nonprofits and businesses who are developing creative and innovative strategies to address our global environmental issues. The new Soho office space will promote a diverse range of artists whose works are participatory, collaborative, interdisciplinary and educational. Future programs and events will include exhibitions, discussions, screenings and workshops.

“Artists today are breaking out of traditional confines of what is considered art and engaging in real world issues. By implementing a participatory structure with the diverse people that make up communities––these artists are pointing the way towards a new paradigm of environmental consciousness and sensitivity”, Amy Lipton, Ecovention 2002
Go to EcoArtSpace

out of the blue opening Feb.17th

out of the blue, an exhibition featuring artwork inspired by weather, geological and atmospheric conditions, will open at Bergen Community College’s Gallery Bergen on Tuesday, February 17, 2009 at 6 p.m. An opening reception will be held from 6-8pm.

The exhibition focuses on the dynamics of human creativity as a metaphor for geological and atmospheric phenomena. Treating issues of weather both literally and symbolically, out of the blue approaches the creative process as a kind of weather system.

Ideas, like hurricanes, seem to come “out of the blue,” though they arrive through a combination of complex forces. Through metaphors provided by art, out of the blue leads us through the tangle of influences—both innovative and destructive—that humans exert upon one another and the environment. Understanding and cultivating these influences and relationships is the key to our cultural vitality in a world where technological hubris and political arrogance can overshadow tolerance and collaboration.

out of the blue generates its own weather conditions, a storm of intertwined processes – artistic, social, political, atmospheric, and geological. As we influence one another, we in turn affect our culture and the environment, and creativity itself becomes a force of nature.

Above image: On the fringes of Hurricane Caroline, 8/30/75. Image courtesy of the National Oceanic & Atmospheric Administration (NOAA)