Robin McKie, science journalist for The Observer, has been to see Steve Waters’ The Contingency Plan, and has noticed that that there is something significant happening across the arts:

Until now, scientists, journalists and politicians have dominated the debate about the threat of greenhouse warming. Many have fought well and brought a proper sense of urgency to the debate. However, it will be our writers, artists and playwrights who will finally delineate the crisis and explore in human terms what lies ahead. Only then can we hope to come to terms with our endangered world….Thus global warming is as much a cultural problem as a scientific or political one and deserves to be addressed through the activities of those who define our culture: our artists and writers.

These individuals will be the ones who reveal to us the kinds of lives we may lead in the near future – not just in physical, but in moral and social terms – as our planet heats up. In other words, we need an Orwell or a Huxley to help us define the terrible issues that confront us – and to judge from the recent efforts of Waters, McCarthy and McEwan we can have a fair amount of confidence that our artists and writers will deliver. Whether or not we choose to listen to them is a different matter.

“Writers and artists are getting warmer” by Robin McKie

To Purchase a Print Copy or Download a PDF for Free visit:

Our next Green Sunday takes place on 7th June, all are welcome, drop in anytime between 3pm – 7pm for tea and cake on the roof, activities with the Secret Seed Society, a swap shop, market, debate about ethical consumerism with Neil Boorman, Oxfam and Morgan Philips plus music, film and books! 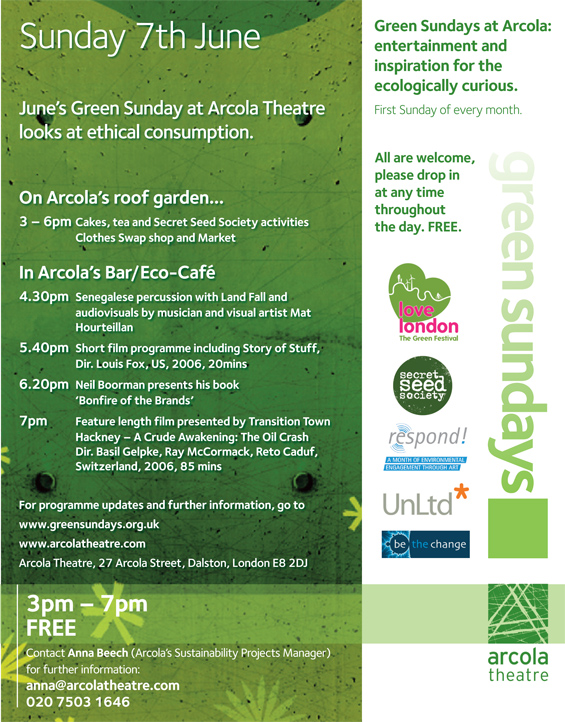 ON THE TRAIL OF A HALF MILE OF AL FRESCO INSTALLATIONS, SCULPTURES AND PERFORMANCES

NewTown has presented several of these “trail art” exhibitions in Pasadena over the last ten years. Here is the latest. Don’t miss it! Only open for two days and includes a great line up of site-specific art and nature experts and some new names. If you go and take pictures, please send me some or send a link to post on the ecologic blog.

On the trail of A Half Mile of Al Fresco Installations, sculptures and performances

To Purchase a Print Copy or Download a PDF for Free visit:

Friday morning at Earth Matters on Stage a small group of us piled into the video conferencing room in the Knight Library at University of Oregon to have a conversation with our interested counterparts in the UK. Our second, but certainly more ambitious, video conference of the day, it harkens back to the discussion surrounding travel, the arts and conferences that has been come up at the RSA here (also to be seen in our archives as part of our feed syndication).

From the Ashden Directory Blog:

Our DVD contribution to Earth Matters On Stage is now online. The interviewees address the question: ‘What Can Be Asked? What Can Be Shown? British Theatre in the Time of Climate Instability.’ (The interviews can also be watched individually.)

Quoting Rilke, Dan Gretton considers the value of quickening the pace of artistic response and cautions against the narcissism of frenzy.

On her allotment, Clare Patey explains how a year-long project changed the quality of the conversation amongst its participants.

In Brazil, João André da Rocha draws attention to the movement and shapes of rural life, especially popular dance, as a way of getting closer to Brazilian culture. (Transcript here.)

With the Lake District as her backdrop, Wallace Heim asks how climate change differs from other political situations and how this might alter the ways in which theatre can be made.

Finally, Mojisola Adebayo performs the first moments of her play Moj of the Antarctic and wonders if some people in theatre think they’re above climate change.

You also can watch each person’s contribution as a separate sequence:

Dan Gretton, co-founder of PLATFORM
responds to Mojisola Adebayo’s question,
‘How far is art worth the damage?’
watch here

Clare Patey, artist and curator
responds to Dan Gretton’s question,
‘Can you talk about the role that slowing down and reflectivity plays, both in your creative process and your interaction with your audiences?’
watch here

Paul Heritage, producer, director People’s Palace Projects and Queen Mary’s University
responds to João André da Rocha’s question,
‘What steps are you taking to descrease the impact of your life in the world?’
watch here

Wallace Heim, co-editor Ashden Directory, academic
responds to Paul Heritage’s question,
‘How can we listen to, see, feel and learn from those who are talked about rather than those who are talking in the great climate change debate?’
watch here

Mojisola Adebayo, artist, theatre-maker
responds to Wallace Heim’s question,
‘What would you keep from theatre and performance practice and what needs to change in response to climate instability?’
watch here

The film is edited by Adam Clarke and directed by Wallace Heim.

‘What can be asked? What can be shown? British theatre and performance in the age of climate instabilit

Well we have to be doing something right, because McKie’s article got this response from factually wayward Daily Telegraph young fogey James Delingpole, lambasting “eco-luvvies”. It’s a conspiracy! froths Delingpole:

What Cape Farewell does brilliantly, Delingpole fulminates, is breed wave after wave of high profile propagandists for the authorised Al Gore/James Hansen version of man made climate doom.

Many of the lectures here at EMOS are held at the very-new Hope Theater at the University of Oregon’s Miller Theatre Complex. Boom: there’s a big square fact to start the post off for you. But I’m going somewhere with it.

Right now, where the Hope would be a big black box is all full up with Set. The floor is painted in a curling desert-river pattern. Upstage is a forest of recycled wooden planks and juttings, a kind of grandpa’s-attic bamboo. In one corner is a platform with puzzle-piece innards: old bedposts, chairs and plywood fold over each other in a hefty collage.

It’s all for the stagings of the Festival’s top two prize-winning plays:  Song of Extinction and Atomic Farmgirl. But what was intended to represent a Bolivian forest and an American farm has come to represent the EMOS festival itself, both literally and figuratively: the set was  constructed with recycled materials.

Today’s sessions were sponsored by the Center for Sustainable Practice in the Arts. Led by Ian Garrett, they included presentations by Steve Mital, University of Oregon’s Director of Sustainability, PhD candidate (and EMOS Production Manager) Damond Morris, several eco-conscious designers, and several pioneers of a Sustainable Dramaturgy program at CalArts.

At this point: it’s day seven. Everyone in the room knows each other, at least by sight. We’re calling each other out in the audience: could you talk about your experience with . . . what’s your perspective on . . . and what begins as a formal presentation becomes a group conversation quickly and easily.

Inspired by Mike Lawler, here are a few questions asked in the course of the day (some got answered, some did not):

What is a “sustainable university”?

What is the impact of a theatrical lighting system?

Where in this stream can we reduce our waste?

What are the next steps in expanding/refining sustainable pedagogy?

How do we reframe our relationship to resources?

How can we implement what we believe in the art we create?

If your curiosity is piqued, I’d encourage you to visit the CSPA’s wiki for tools and nuggets of information. As to the rest, I leave you with Morris’ Five D’s of Design for Environment:

See you on the other side of  a recycled-wooden forest.

It’s easy to get all cranial on the whole planet/culture relationship. It is, in fact, kind of scary not to.  Start learning with your body and not your brain, and well, that’s a one-way ticket to . . . this conference. Hem. Earth Matters On Stage. On the stage, bucko, not just in your brain. You better get moving.

For the first weekend here I was a part of the Art Culture Nature Working Group. Ten fellows were selected to lead half-hour workshops exploring the relationship between our craft and our planet. We were essentially encouraged to use the group as a brain trust– but more often than not, we relied on our bodies.

As a group, we moved. We formed sculptures about place, we followed impulses and rolled around on the grass. We took pictures of our surroundings, we worked with soil. All of this wildness took place under the guidance of the workshop leader (and the extreme limitations of time). We looked very silly sometimes, but learned a lot about process and structure.

Later in the week came a workshop about labyrinths, led by Paul Bindel and Justin Simms. I learned that labyrinths are used most commonly not in pursuit of bullheaded monsters, or for escaping Jack Nicholson, but as meditative tools.

There are labyrinths everywhere: 60 listed in Massachusetts alone. Their curling series of lines gives visitors a form in which to get lost, to walk through while their minds drift.  It’s a way to pay penance, to build serenity. It’s a task for your body that lets your brain go. Just follow the lines.

As a group we went out to a grove nearby the University of Oregon and built a labyrinth with wood gathered nearby. When it was done– spiraling sticky-sticks winding paths through the tiny trees– we each walked it. You could hear branches cracking and flutes playing and folks chatting as you wove your way around and around and around.  A great task for the body, a great chance to digest all the conference info and just go, go, go.