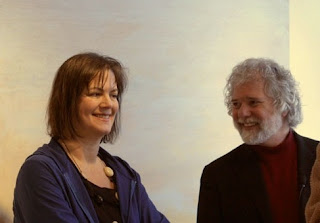 MNN.com is a new website that provides environmental news and information, they describe themselves as a “one-stop resource and an everyman’s eco-guide offering original programs, articles, blogs, videos, and how-to guides along with breaking news stories.” Chuck Leavell, MNN’s Director of Environmental Affairs, is a committed environmentalist, and author of Forever Green and The Tree Farmer. He has been the keyboardist for the Rolling Stones since 1972 and was previously a member of the Allman Brothers Band. Leavell has also played with Eric Clapton, The Black Crowes, George Harrison, The Allman Brothers Band, The Indigo Girls, and many, many more.

The interview took place in Beacon, NY at the Van Brunt Gallery where Draper’s current collaborative project is on view, Habitat for Artists. Lipton spoke about ecoartspace’s mission and history including projects in New York City and the Hudson Valley. She made the point that the modern environmental movement began here more than 40 years ago, when Scenic Hudson was formed as an organization to protest the planned blasting of Storm King Mountain by Con Edison. Scenic Hudson won that battle and continues to fight for land and habitat preservation along the Hudson river and beyond. It is also not a surprise that the Hudson Valley was the birthplace of the first American art movement, The Hudson River School, when 19th century artists made paintings depicting the extravagant beauty of what was then still mostly pristine wilderness – though the encroachment of industry had already begun via the train line. Some of the Hudson River School artists were reacting to environmental degradation in their time and the tradition has held. This early example of the merger between art and conservation has inspired many contemporary proponents of ecological art, and that’s where ecoartspace comes into the picture.

Simon Draper also spoke with Leavell and crew, taking them for a stroll in Beacon to see a few of the remaining habitats (outdoor art studios) created by the Habitat for Artists collective last summer (see earlier blog post). HFA will open with a new project at the ecoartspace NYC office on March 5th (more to come).

This meeting was facilitated by Gwendolyn Bounds, author of Little Chapel on the River and Wall Street Journal writer, who also spoke with Lipton and Draper at length about their current joint project. ecoartspace has been the sponsor of HFA activities since summer 2008.