Eco Art Blog is amused by the number of greenwashing ads in a magazine he picks up:

Oops, here’s another one. This time for Pulstar, “the world’s first
eco-friendly spark plug.” I once again cringe at my use of “eco” in the
name for this blog, but I guess this company couldn’t come up with
anything better either. 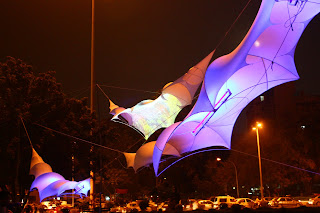 Expose Maximum has some photographs of some of the installations from the 48oC Festival taking place in New Delhi. (Michaela Crimmin of RSA Arts and Ecology is there to deliver a talk/provocation this weekend and has just sent an email saying it’s an “incredible initiative”). Delhi Greens is blogging it.

The Ashden Directory blog references our David Lan interview to say: “David Lan gets it“.

Free Soil lists this symposium on bioart, guerilla and avant-gardening taking place in Rotterdam on 19th December, run by The Institute for the Unstable Media. It’ll be live streamed.

Finaly RealClimate writes one of those essays we love to read on an early-20th Century scientific dispute, The case of the midwife toad, when Lamarkians gained a boost from a scientist whose work appeared to overturn Darwin’s model. The eagerness with which maverick scientist Paul Kammer’s theories were received by the public and the press has interesting parallels with the way climate change deniers are given oxygen in the popular media.